Posted on January 12, 2021 by Harriet Richardson

Inverurie lies to the north-west of Aberdeen. A small hospital for infectious diseases was built in the town in the 1890s to serve the Garioch district. The site and plans were approved by the Local Government Board for Scotland in 1894-5, and the hospital opened in January 1897 (see map below). It had cost about £2,000.

Extract from the 2nd-edition OS map, revised in 1899. Reproduced by permission of the National Library of Scotland

The hospital was designed by Jenkins and Marr of Aberdeen, and comprised two separate sections in a single-storey and attic building. The smaller section contained two wards, which could be combined into one, with three beds each, and a small kitchen and lavatories. The larger section to the west had a large and a small ward, separated by folding doors, with seven and three beds respectively. The main kitchen, matron’s room, bathroom and staff bedrooms were also in this section of the building.

This hospital was replaced in the 1930s by a new and much larger hospital, for a time the old building was use as council offices. The Medical Officer of Health’s Report for 1936 noted that the original hospital had been recognised as structurally unsuitable for infectious cases for a long time, and that the County Council had decided to erect a new hospital near by with between 60 and 70 beds. A serious epidemic of scarlet fever and diphtheria had highlighted the shortage of beds in the county, and the need for an up-to-date hospital able to cope with diseases of epidemic proportions.

Entrance to the hospital photographed in 2000, © Ian Shepherd,  from RCAHMS

The site had been acquired and plans prepared in by the architect R. Leslie Rollo in consultation with the Medical Officer for Health.  The plans were approved early in 1937. An article in The Scotsman headed ‘£50,000 Aberdeenshire Scheme’,  records that the construction of the hospital was to be of cement blocks, which had been recommended to the architect as both brick and granite would be very much more expensive. However, when the tenders were submitted the cost came in at around £60,000, with another £13,000 needed for the land, furnishings, equipment and architects’ fees. A number of councillors objected to the high cost, arguing that it was a waste of public money. Various suggestions for economies were made, but the original plans seem to have been adhered to. 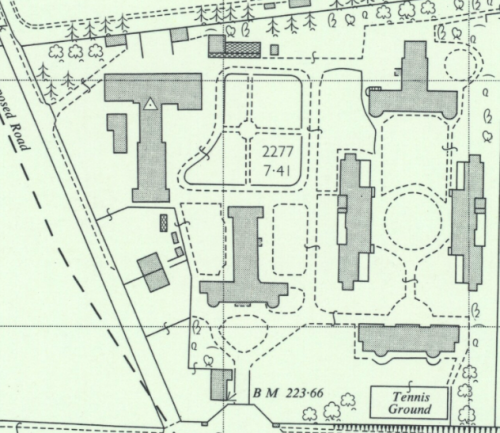 Hailed as the most ambitious hospital scheme that Aberdeenshire had ever financed, the hospital was finally completed in December 1940.  It was intended primarily to serve the suburban districts of Aberdeen, Garioch, Turriff, Ellon and Huntly. Provision was made for 60 beds, 20 in a cubicle block of two storeys and 40 in two single‑storey pavilions. These ward blocks were arranged around a square with the nurses’ home on the fourth side opposite the cubicle block.

View of the single-storey ward pavilion on the east side of the square. Photographed October 2020 © H. Blakeman

The single-storey ward pavilions were intended for scarlet fever and diphtheria cases and comprised wards of three and thirteen beds. The cubicle block could take doubtful cases or patients suffering from different diseases as each separate room or cubicle had just two beds (nine in all)  – usually these had glazed partitions between them. The cubicle block had an operating theatre and treatment room attached.

View of the corresponding ward pavilion on the west side of the square. Photographed in October 2020 © H. Blakeman

There was also an administration block with kitchen, stores and dining‑rooms, located to the west of the wards and near the site entrance. This is a two-storey, T-plan building with large bow windows to the ground-floor rooms at either end of the main front, and a smart porch over the main entrance.  The buildings were designed in the streamlined manner of the International Modern style, with wide bow windows, on the lines of Tait’s Hawkhead Hospital in Paisley. 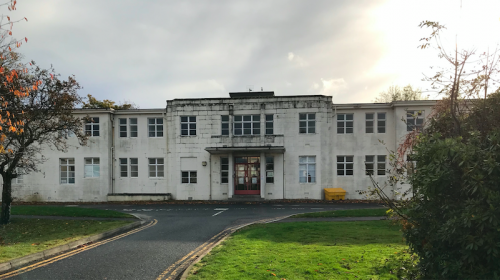 The north elevation of the Nurses’ Home. Photographed in 2020 © H. Blakeman

The nurses’ home lies to the south of the wards, the main rooms enjoying a view south to a tennis court. Like the administration block, this has two bow windows to the outer ground-floor rooms, here leading out onto a terrace. There was accommodation for 46 staff, and training nurses had study room. Service buildings included a laundry and ambulance station, and boiler house to power the central heating system.

In 1958 Inverurie Hospital was adapted to maternity as well as general nursing cases. It had by then become part of the National Health Service and was part of the North Eastern Regional Hospital Board, based at Aberdeen. With the introduction of antibiotics the need for infectious diseases hospitals had greatly diminished, but there had been a rise in demand for maternity accommodation. An ageing population also created a shortage of beds for geriatric patients, and many of the smaller isolation hospitals became geriatric units. Inverurie was to provide 30 maternity beds, the rest for ordinary medical beds and some for the elderly.

Later developments at the site included a standard plan 30‑bed ward unit, which opened in 1982. Plans for a major redevelopment were made in the early 1990s, intended to provide a geriatric unit, day hospital and facilities for occupational therapy and physiotherapy. These eventually seem to have been abandoned. More recently a new ‘Integrated Health Care HUB’  has been built, and the 1980s building demolished. The hub was the first phase in a projected larger scheme. It occupies the site of the cubicle isolation block and was designed by Mackie Ramsay Taylor Architects. Their brief was to provide for General Medical Practice, including minor injuries, a Community Midwifery Unit, Dental Suite, and various out-patient clinics. Plans were finalised in about 2015.

With grateful thanks to my former colleague at the Survey of London, Sarah Milne’s grandmother, Elsie Cartney, a former nurse, who very kindly gave me a copy of the excellent history of the Inverurie hospitals produced by many of the people who worked there and published in 2004.

View of the back of the admin block with one of the local residents in the foreground. © H. Blakeman

I am an architectural historian, currently a PhD student at the University of Edinburgh, researching post-war hospital buildings in Scotland. From 1991 to 2018 I worked on the Survey of London. During the late 1980s and early 1990s I worked on surveys of hospital architecture in Scotland and England.
View all posts by Harriet Richardson →
This entry was posted in Maternity Hospital, Scottish Hospitals and tagged Inverurie Hospital. Bookmark the permalink.