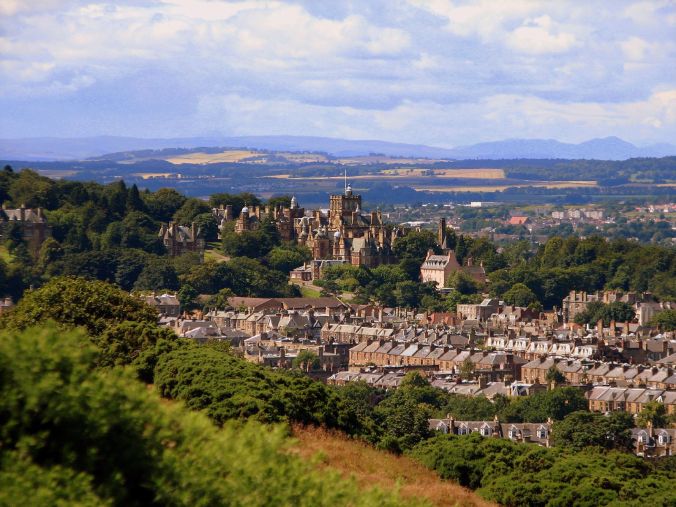 These blue remembered hills… Craighouse in the middle distance, ‘Morningside and Craighouse’ by Pascal Blachier, taken in 2007, imaged licensed under CC BY 2.0

A year ago planning permission was granted for the redevelopment of Craighouse, Edinburgh, latterly the campus of Edinburgh Napier University. The impressive group of Victorian buildings erected in the grounds of Old Craig House were originally a private psychiatric hospital, created as an annex to the Royal Edinburgh Asylum, and possibly the most luxurious private mental hospital ever built in Britain. 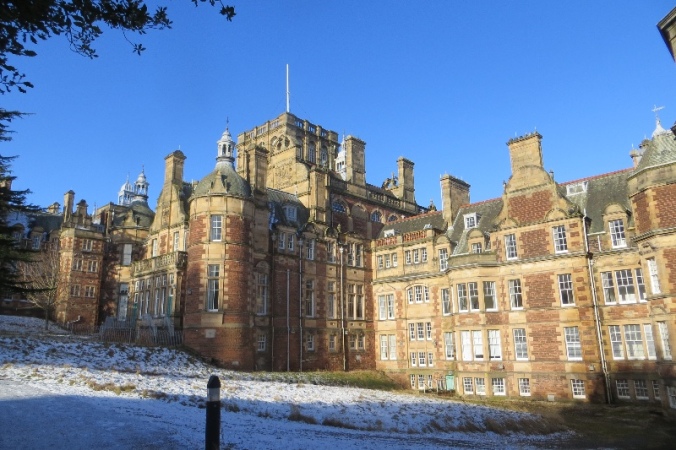 Craighouse, photographed in 2015  © Copyright Richard Webb and licensed for reuse under this Creative Commons Licence

The hospital closed in the early 1990s and was subsequently bought by Napier University. With a hefty Historic Buildings Grant, the University refurbished the buildings on the site as a new campus. But in 2011 the University took the decision to close the campus. Plans were submitted to redevelop the site for housing. Despite vigorous opposition from heritage bodies and local community groups permission was granted in September 2014. Oberlanders Architects drew up plans for the development for The Craighouse Partnership, which comprise the conversion of New Craig House into 64 homes. New blocks on the site include Kings Craig, a four-storey terrace of town houses, directly to the south of New Craighouse; a similar block, West Craig, in front of Queen’s Craig villa; another on the east of the site, Burton Villa, and a lower block north of New Craighouse, name North Craig. The new buildings, in a style reminiscent to my eye of 1960s university campuses, mimic the colours of the nineteenth century buildings, in the way that always seems to pass muster these days where there is a desire to be sympathetic to the character of existing  buildings. Very often a pointless exercise, as it seldom seems successful. 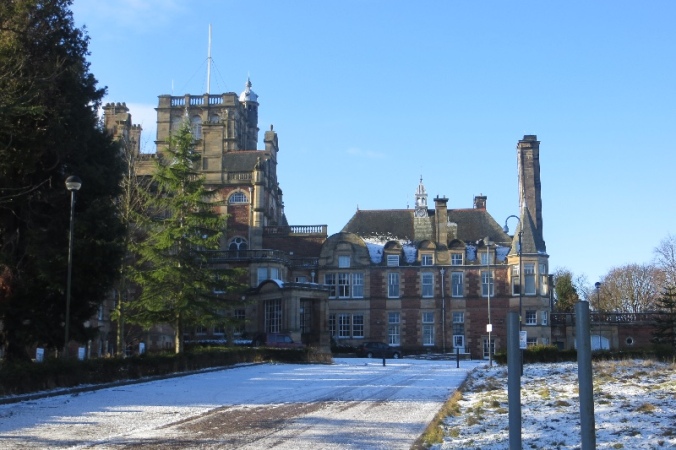 Craighouse, photographed in 2015 © Copyright Richard Webb and licensed for reuse under this Creative Commons Licence

A year on, the campaign to modify the plans and lessen the impact of the housing scheme continues and work had not yet commenced. The Craighouse scheme makes an interesting comparison with Holloway Sanatorium, Egham – Craighouses’ nearest rival in terms of a private asylum that was highly decorative and lavishly appointed – which was converted into luxury homes in the 1990s.

When Craighouse was newly opened, the architectural photographer Bedford Lemere was commissioned to record the buildings. This photographic record – eerily devoid of people -preserved at the National Monuments Record of Scotland, provides a glimpse of the surroundings that were thought beneficial in curing those suffering from mental illness at the end of the nineteenth century. The photographs reproduced below are of the communal spaces within the hospital – the grandest of these being the Great Hall. 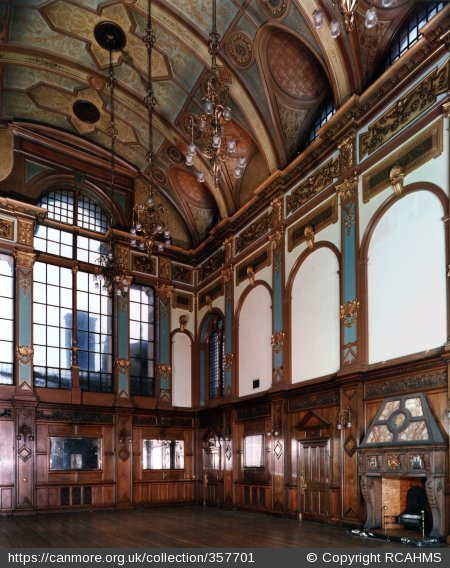 In 1894, the Journal of Decorative Art quoted: ‘It is one of Dr Clouston’s leading principles that in the treatment of the insane, their surroundings should be made as bright and as pleasant as possible’.

High-level view of the Great Hall (from RCAHMS)

Another view of the Great Hall (from RCAHMS)

Detail of fireplace and doorway in the Great Hall, Craig House, photographed in 1895 by Bedford Lemere, from RCAHMS

The hall was designed as an ‘uplifting’ environment for patients. It was used for social functions including musical evenings, theatrical productions and orchestral recitals.

North elevation of New Craig House, Sydney Mitchell & Wilson, 1889 – the Great Hall is just to the left of the tower – recognisable from the tall venetian window (from RCAHMS)

Other interiors photographed by Bedford Lemere included the dining-room and sitting-room in one of the detached villas beside New Craig House. South Craig Villa, one of three detached villas designed in 1889 by Sydney Mitchell, accommodated 15 female private paying patients, many of whom were accompanied by their personal staff of servants and attendants. The ladies were classified as first- or second-class patients, depending on how much they could afford to pay, and were allocated a dining room accordingly. 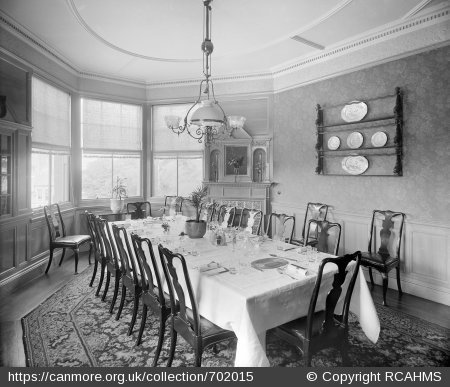 Dining-Room in South Craig Villa, photographed in 1895 by Bedford Lemere from RCAHMS

A sitting-room in South Craig Villa (from RCAHMS)

This plan is labelled as South East Villa, New Craig House – but seems to equate to South Craig Villa (from RCAHMS)

There were less formal rooms within New Craig House, the billiard room photographed here could just as easily be from a country house, there is nothing institutional about the room.

A sitting-room in Craig House, photographed by Bedford Lemere in 1895, from RCAHMS

A sitting-room in Craig House, photographed by Bedford Lemere in 1895, from RCAHMS

The same room, looking the other way, or a similar one? This one also described as a sitting-room in Craig House (from RCAHMS).

The room pictured below may have been belonged to a patients. It is labelled as ‘McGregor’s room’ but I do not know whether McGregor was male or female, a patient or a member of staff.

identified only as ‘McGregor’s room’, one of the set of photographs of Craig House Clinic taken by Bedford Lemere in 1895, from RCAHMS

Victorian asylums were notorious for their miles of long corridors, in the earlier nineteenth century these were often broad and doubled as day rooms for the patients. The subject of asylum corridors was often hotly debated amongst architects and physicians, perhaps this is why so many of the corridors at Craighouse seem to have been recorded. 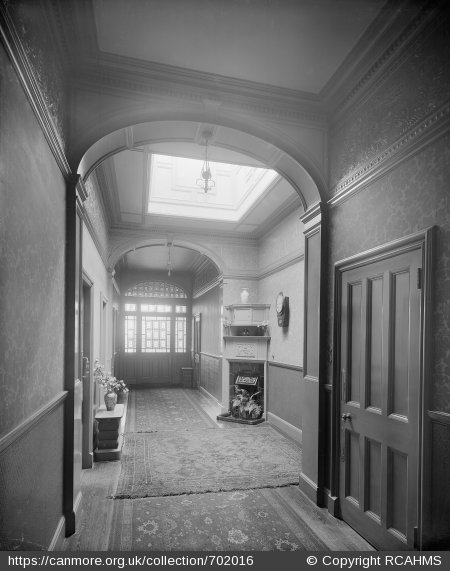 A corridor in Craig House,  photographed by Bedford Lemere in 1895, from RCAHMS

perhaps looking the other way? This is also described as a corridor in East Wing, Craig House (from RCAHMS)

and another corridor in Craig House (from RCAHMS)

Below is a short history of the site extracted from the Edinburgh page of this site.

ROYAL EDINBURGH HOSPITAL, THOMAS CLOUSTON CLINIC, CRAIGHOUSE, CRAIGHOUSE ROAD Old Craighouse dates from 1565, the date appearing over the original entrance doorway. Macgibbon and Ross noted that the house appeared to have been built by the Symsones. A new wing was added in 1746. In 1877 Craighouse estate was purchased by the Royal Edinburgh Asylum and adapted for the accommodation of higher class patients. 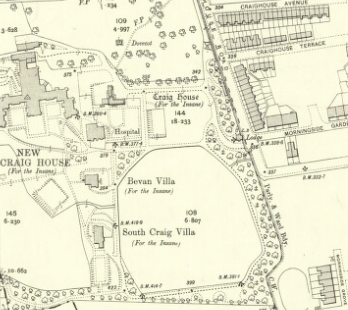 Extract from the 2nd edition OS Map revised 1905-6. Reproduced by permission of the National Library of Scotland.

From 1889 to 1894 work on the new buildings was carried out to designs by Sydney Mitchell, these comprised the New Craighouse, East and West Hospital blocks, Queen’s Craig, South Craig and Bevan House. Dr Thomas Clouston was the key figure in the development of Craighouse. He had been appointed as Physician Superintendent to the Royal Edinburgh Asylum in 1873 and in his first Annual Report commented on the state of the buildings:

As regards our structural arrangements we are undoubtedly behindhand somewhat. We need more accommodation for those who wish the benefits of the institution and can pay high boards… we should be prepared to extend our benefits to the wealthiest …our poorhouses are palatial buildings and in the new asylums for paupers through the country no expense has been spared to make them cheerful and comfortable.

Once Clouston had established patients at Old Craighouse in 1878 he began planning the development of the site in a new and bold way:

Craighouse site affords ample room for many villas of various kinds, surrounding a central block for recent acute cases, kitchens, dining and public rooms. In the construction of these a principle might be adopted which has never yet been fully carried out in asylums, viz of adaptation of each house or part of house to the varied needs and mental conditions of its inhabitants … an asylum so constructed should contain all the medical appliances that would be likely to do good, it should have a billiard room, gymnasium, swimming‑bath and work rooms.

The scheme was long in the forming, in the Annual Report for 1885 Clouston comments that he has been devoting his attention to the principles of construction of hospitals for the better classes of the insane in the last years. He had visited asylums in America and other parts of Britain. In particular the Royal Asylums at Montrose, Dundee, Perth, Glasgow and Dumfries and in England the asylums at Northampton, Cheadle, Gloucester and St Ann’s Health Registered Hospital, the Bethlem Royal Hospital and two private asylums in London. By 1887 Sydney Mitchell had been appointed as architect. Work began in 1889 and the foundation stone of New Craighouse was laid on 16 July 1890 by the Earl of Stair.

There were five principal buildings. The main building or New Craighouse was situated to the west of Old Craighouse and further west again was the west hospital block, Queen’s Craig. To the south of these were the East Hospital, Bevan House and South Craig. New Craighouse was formally opened on 26 October 1894 by the Duke of Buccleuch and Queensberry. South Craig Villa, Bevan House and the Ladies Hospital had already been occupied for some time. The achievement was phenomenal, and on such a vast scale that it remains unrivalled in hospital architecture in Scotland. Variety was the key to the design, variety of style, colour and texture achieved through the finishes, the materials, the varied roof line and every conceivable means. Inside it was sumptuously furnished and fitted up. After 1972 the buildings became the Thomas Clouston Clinic, named after the individual whose personal ideals were embodied in the site. [Sources: Lothian Health Board Archives, Annual Reports of Royal Edinburgh Hospital: RCAHMS, National Monuments Record of Scotland, drawings collection: The Builder, 7 Jan. 1888, p.16; 15 June 1889, p.442; 10 March, 1894, p.203.]