Posted on August 14, 2016 by Harriet Richardson 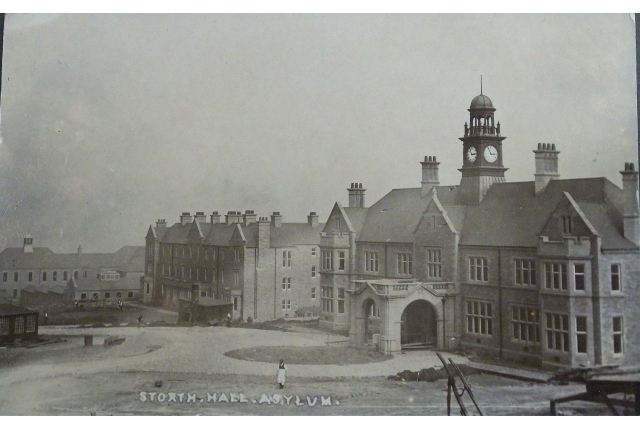 Storthes Hall was the fourth, and last, pauper lunatic asylum for the West Riding of Yorkshire. The first section, designed as an acute hospital, opened in June 1904. This was similar to the earlier acute block added to the Wakefield asylum in 1899. Only the gate lodge and the administration block of this section now survive, the remainder of the buildings providing the footprint for Huddersfield University’s student village that now occupies the site. The larger section to the south-west (pictured above), has also been demolished with just the administration block remaining in a ruinous state.

Detail from the 6-inch OS map, revised in 1904-5. Reproduced by permission of the National Library of Scotland.

The West Riding Asylums Committee decided to build their fourth pauper lunatic institution around 1897 and purchased Storthes Hall, together with a large part of the estate, from Thomas Norton in 1898. By January 1899 the county surveyor, Joseph Vickers Edwards, had visited the most recent asylums built in England and Scotland and presented a report to the Asylums Committee. The Commissioners in Lunacy advised that they would not approve an asylum designed on the village or colony principle, a type that was emerging as an ideal form for mental hospitals around this time. They agreed to sanction plans for the acute hospital provided that it was entirely separate from the general  asylum complex. Originally this section was to have 200 beds (100 each of male and female patients), the general asylum was to accommodate 1,200 patients and be capable of enlargement. [1]

Interior of one of the broad corridors of the asylum which served as day-room space. Reproduced courtesy of Peter Aitkenhead.

The acute hospital was symmetrically arranged with two blocks or wards on either side of the central administrative section, each for 50 patients, one for sick and infirm, the other for recent or acute cases.  Flanking the hospital were two detached blocks, or ‘cottage homes’, designed to house 36 chronic, healthy patients each, who would form part of the labour force for the asylum. [2]  To the south-west of the acute hospital was the central boiler house and laundry, with laundry residence, these sections were constructed in 1902-3 by John Radcliffe & Sons, Huddersfield (acute hospital) and William Nicholson & Sons, Leeds (laundry and boiler house). [3] The rest of the complex was commenced in 1904 once the acute hospital was completed, with Radcliffe & Sons as the building contractors.

Extract from the 1:25,000 OS map published in 1955. The acute hospital is to the north, the boiler house and laundry section centrally place and the large echelon-plan complex was for general cases. Reproduced by permission of the National Library of Scotland

Joseph Vickers Edwards, who designed the asylum, was the County Architect. He also designed High Royds Hospital, the third West Riding asylum, in 1885 (built in 1887-9), and the hospital blocks at Scalebor Park, which opened in 1902 as an asylum for paying patients. Edwards was born in Liverpool around 1852, and trained as a civil engineer. He had been the borough engineer for Burnley before he was appointed as the deputy surveyor and architect to the West Riding in the late 1870s under Bernard Hartley. As County Architect he initially had responsibility for roads and bridges as well as all the other local authority buildings. He designed a number of public and council buildings: additions to County Hall, the police headquarters at Wakefield, the teacher-training college at Bingley, and inebriates’ reformatory at Cattal. He was remembered as a genial man, popular with his staff and ‘moderately fond’ of sports – mostly cricket. [4] 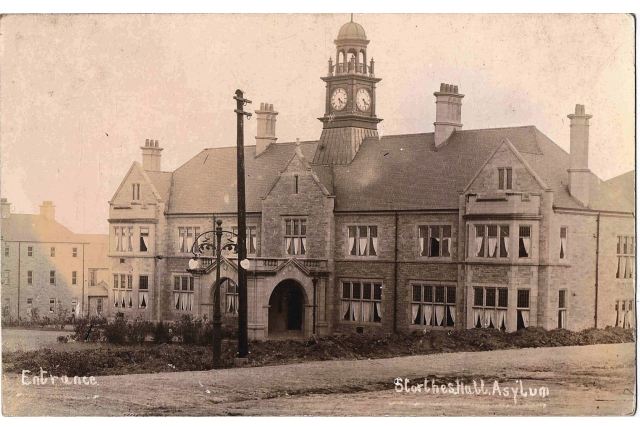 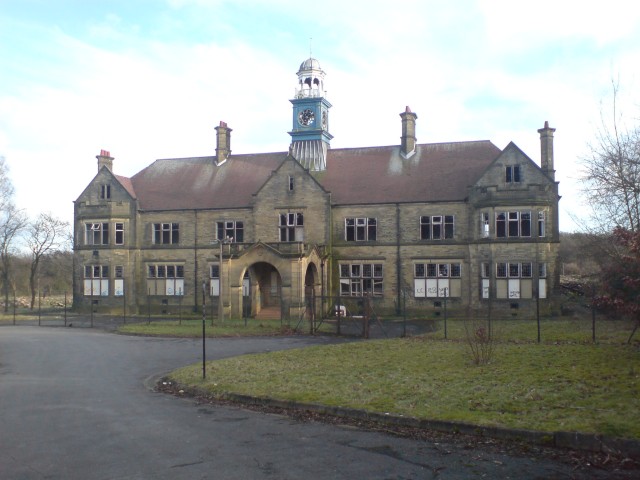 The admin block of the general asylum, photographed after the rest of the huge asylum complex around it had been demolished. By Bilko123 at English Wikipedia – Transferred from en.wikipedia to Commons by Small-town hero, Public Domain.

Storthes Hall itself, a private house to the north east of the hospital site, was used as an institution for the mentally handicapped, and was known as the Mansion Hospital. After it closed in 1991 it reverted to a private residence. In 2005 outline planning permission was granted for building a retirement community on the site of the former general asylum complex. An extension to the time limit was granted in 2012, considerable delays had ensued with arguments over the inclusion of affordable housing in the scheme. Revised plans were approved in 2016 which include converting the derelict admin block into a residential care home.

Detail from an early postcard of Storthes Hall Asylum, probably dating from around the time of the completion of the buildings in the early twentieth century. Reproduced courtesy of Peter Aitkenhead.

For more images of the asylum and details of its history see highroydshospital.com, the website for Storthes Hall Park student accommodation has photographs, mostly interiors, of the Huddersfield University’s student village. Historic England Archives holds a file on the hospital, ref: BF102003. Recent bird’s-eye aerial photography of the site can be seen on Bing.com/maps.

I am an architectural historian, currently a PhD student at the University of Edinburgh, researching post-war hospital buildings in Scotland. From 1991 to 2018 I worked on the Survey of London. During the late 1980s and early 1990s I worked on surveys of hospital architecture in Scotland and England.
View all posts by Harriet Richardson →
This entry was posted in asylums, English Hospitals and tagged asylum, historic photographs, hospital re-use, Huddersfield University, pauper lunatic asylum, Storthes Hall. Bookmark the permalink.