In February 1993, Robert Taylor from the Cambridge team of the RCHME Hospitals Project, produced his eleventh newsletter. Here are snippets on prefabricated hospitals by Humphreys, early prison infirmaries, provision of accommodation for tuberculosis in workhouses, the Metropolitan Asylums Board, Portal Frames and Wimborne Cottage Hospital (with a few digressions from me).

Another advertisement for Humphreys’ Iron Hospitals lists places where hospitals have been provided, but this time of 1895. All but three of the hospitals are also on the list published in 1915. As Humprheys provided buildings for the Metropolitan Asylums Board, is there any chance that they made the iron buildings of about 1894 at Colney Hatch asylum that burnt with such dramatic effect in 1903?

The three mentioned on the earlier list but not on the later one were: New Calverley, Romney, and Nottingham. ‘London’ is also listed. There are 102 places listed altogether.

That a shortened version of John Howard’s The State of the Prisons should have been considered a sufficient work of literature to be added to the Everyman Library in 1929 is almost as amazing as the record of cruelty and discomfort contained within the book. The Everyman edition is taken from the third edition of Howard’s book, published in 1784.

Gateway to the County Gaol at Southwark, from Survey of London vol.25

By 1784 few prisons had an infirmary. The impression gained from skipping through Howard is that there were normally two rooms, one for each sex, but that these rooms were commonly on an upper storey and that they were not very large. At the Manchester County Bridewell, built in 1774, there were two rooms 14ft by 12ft. The Chelmsford County Gaol, completed in about 1778, had only one room, described by Howard as ‘close’ and therefore not used. The two rooms at the recently built Southwark County Gaol were also described as close, with only one small window each, and they too appear to have been little used because of this unsuitability. Whether the infirmaries were on the upper floor to get superior ventilation above the noisome cells is not clear; it could be that they were less convenient and so devoted to a less important function.

Howard himself considered that dryness and ventilation should be the principal factors. Howard also paid attention to the extent to which building were lime-washed. This he regarded in keeping with contemporary theory, as the one remedy for both infectious diseases and ‘bugs’ (vermin). Lime-washing as often as twice a year would kill disease and infestation. Many years later, in 1832, lime-washing houses was often tried as a precaution against cholera. 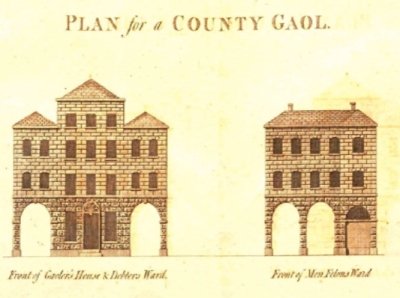 The fourth edition of Howard’s book published in 1792 was illustrated, and included a model plan and elevations.

Howard listed the most important features of an infirmary or sick ward in a prison as:
1. It should be in an airy part of the court
2. It should be detached from the rest of the gaol
3. It should be raised on arcades
4. The centre of the ward floor should have a grating for ventilation, 12 to 14 inches square
5. Perhaps there should be hand ventiltors

Some of these features can be seen in his model plan for a county gaol published in the 1792 edition of the State of Prisons.

TB in the Workhouse

By the beginning of 1904 some 27 English Poor Law Unions admitted to having adapted wards in their workhouse for consumptive patients, so that they could be separated from the rest of the occupants. Until then consumptives were mixed indiscriminately with the rest of the inmates, and remained so mixed at other workhouses for some time. Just how little work this involved will only emerge from further investigation, but my suspicion is that a French window and a balcony was probably a generous amount of alteration. At that time, open-air treatment for tuberculosis at Sheffield Royal Infirmary consisted simply of leaving half of the windows in the ward permanently open, and it seems that many or most unions took the same approach.

Photograph showing the roof garden c.1915 with revolving shelters, probably for convalescents rather than Tb patients. From the RAMC Muniment Collection in the care of the Wellcome Library. Reproduced under Creative Commons licence CC BY 4.0

(The mention of shelters at Bath put me in mind of this photograph of the King George V military hospital, for more on this hospital see the excellent Lost Hospitals of London website.)

A brief paragraph in Paul Davies’ book The Old Royal Surrey County Hospital tells us that ‘the Metropolitan Asylums Board designated King George V Hospital, Godalming, and two other of their hospitals as ‘plant propagation centres’. This is a change of use that does not appear in any of the directories, and suggests that the M. A. B. operated a very successful cover-up. Presumably they also ran a very successful and profitable business, far more profitable than curing Londoners of their physical and mental ills.

Robert Taylor succinctly described the portal frame as ‘a modern version of a jointed cruck’ but was struggling to date this type of construction until stumbling over an article in The Builder from the 1940s. 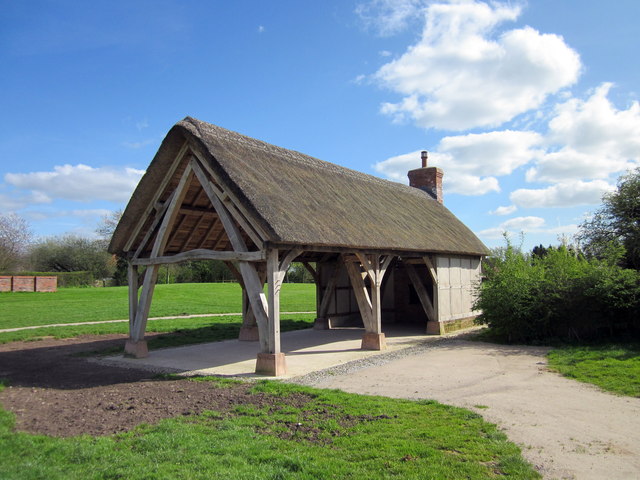 Cruck Framed Barn on Aldford Village Green photographed in 2014. This thatched, oak cruck framed barn was built in 2013 in a joint project between the Eaton Estate and Chester Renaissance. The purpose was to keep heritage skills alive by using modern and old-style building materials and methods. The barn is used as a public shelter and has a brick barbecue built into the chimney. © Copyright Jeff Buck and licensed for reuse under this Creative Commons Licence

The Ministry of Works and Planning carried out experiments between 1939 and 1942 to design a cheap, quickly erected hut that was largely prefabricated, infinitely adaptable, and durable. By 1942 they had developed the M.O.W.P. Standard Hut with reinforced concrete jointed crucks (two bracketed posts bolted to a pair of rafters, for the benefit of readers who are not members of the Vernacular Architecture Group) as its main feature. The trusses at each end were different, having two posts carrying a tie-beam with a wooden frame above to which corrugated asbestos was nailed. The corner posts are of a distinctive shape, with a quarter-round hollow. The trusses are usually at 6-foot centres, and the building is just under 20 feet wide overall. Wall panels and roof covering are whatever is available.

These huts crop up on every type of hospital site, usually as ancillary buildings such as laboratories, if indeed any function can be ascribed to them. At Ipswich workhouse they were used to create an H-shaped addition to the infirmary with operating theatre in the central range. It seems therefore that they are unlikely to be earlier than 1942. How late this design, with concave corner posts, remained in use is not known.

This answers an old question, where the name portal frame came from. The minister of Works and Planning from 1942 to 1944 was Sir Wyndham Portal, 3rd baronet, created a baronet in 1935 and viscount in 1945. Like an earlier minister of transport he gave his name to something he did not invent, but unlike Mr Hore-Belisha’s beacon the invention took place before he became minister.

Whilst the idea that the Ministry of Works named its design after their minister, Sir Wyndham Portal, it has been gently pointed out to me that the term ‘portal frame’ was in use long before 1942. Indeed, a very quick search on the British Newspaper Archive provides evidence of its use in 1902. An article from Engineering News  reported on a novel suspension bridge constructed in Freiburg, Switzerland, designed by the Swiss engineer M. Grimaud. The bridge was supported on a timber portal frame. (Source: the article was covered in the Irish News & Belfast Morning News, 4 Oct 1902, p.6)

In 1892 the committee of Wimborne Cottage Hospital in Dorset discussed the propriety of treating pauper patients. One of the doctors said that they should not be admitted because the workhouse infirmary was better equipped to deal with operations.

Wimborne, Victoria Hospital, the original building photographed in 2015  © Copyright Mike Searle and licensed for reuse under this Creative Commons Licence

The hospital historian’s comment on this in 1948 was that as neither the cottage hospital or the workhouse infirmary had any equipment for operations, this probably meant that the workhouse had a bigger kitchen table. We should also remember that at this time the theatre doubled as a bathroom.

Mike Searle’s photograph above from Geograph.org.uk, is captioned with this brief account of the building’s history:

The hospital was built in 1887 to commemorate Queen Victoria’s Golden Jubilee. The land was owned by Sir John Hanham of Deans Court who leased it at a peppercorn rent on condition that the poor would be treated there. Many local people donated money towards the cost of the building including Sir Richard Glyn of the Gaunt’s estate who gave £700. It opened initially with only thirty beds, and was limited to accepting local parishioners only, but as it grew, this was extended to outlying villages. It came under the authority of the NHS in 1947 when it ceased to be a voluntary hospital.

I am an architectural historian, currently a PhD student at the University of Edinburgh, researching post-war hospital buildings in Scotland. From 1991 to 2018 I worked on the Survey of London. During the late 1980s and early 1990s I worked on surveys of hospital architecture in Scotland and England.
View all posts by Harriet Richardson →
This entry was posted in English Hospitals and tagged architecure, historic photographs, Humphreys of Knightsbridge, John Howard, Portal Frame, Prison infirmaries, Second World War, temporary buildings, Tuberculosis. Bookmark the permalink.