Posted on November 5, 2015 by Harriet Richardson

A competition was held for the design of Ayr District Asylum in 1864. The commission was awarded to Edwards & Robertson of Dundee early the following year, their plans having been judged ‘most preferable’ (see Ailsa Hospital, on the Ayrshire and Arran page). There were seven competitors, and the runners up were each awarded £25. These included Peddie and Kinnear, whose plans are in the National Monument Record of Scotland, Murdoch and McDermott of Ayr, and William Railton, of Kilmarnock. [1]

Railton’s plans are dated 31 December 1864. William Railton was an architect and engineer who also designed Kilmarnock Infirmary and the Cunninghame Combination Poorhouse (later Ravenspark Hospital), neither of which has survived. He was born in Glasgow but moved to Kilmarnock at a young age, and married Isabella Railton of Carlisle in 1859. He is not the William Railton who designed Nelson’s Column in Trafalgar Square. [2] Although the plans for Ayr District Asylum were unexecuted they are interesting by way of comparison with Edwards and Robertson’s plans and as an example of the type of accommodation that was generally provided for ‘pauper lunatics’ in the mid-nineteenth century.

The two-storey range in the foreground with its slender tower rising above the main entrance, was to contain rooms for visitors and new inmates and the apartment of the medical superintendent (on the left with a separate front door). This range sits in front of the main asylum complex which is contained within a walled enclosure. The long three-storey block designed to house the patients is almost devoid of ornament.

The design provided accommodation for 204 patients in the first instance, with the potential to extend later as funds permitted. The patients were simply divided by gender, males on one side, females on the other, with equal numbers of each. On the female side was the wash-house and on the male side were workshops. A small dead house was located next to the workshops off the airing yard of the male infirmary wing.

Detail of the central portion of the complex with the administration block at the front (bottom of the plan),

The plan was a little old-fashioned for its date, the day rooms lack bay windows and the provisions of baths is distinctly miserly, which might explain why Railton failed to win the competition.

The first floor has a similar arrangement of single rooms off a broad corridor at the end of which is a rectangular day room, a further day room occupies the space over the wing for infirm cases. Staff accommodation occupies a central position and there are dormitories over the wash-house and workshops. Rather than for staff these are more likely to be for patients whose condition rendered them fit for work. 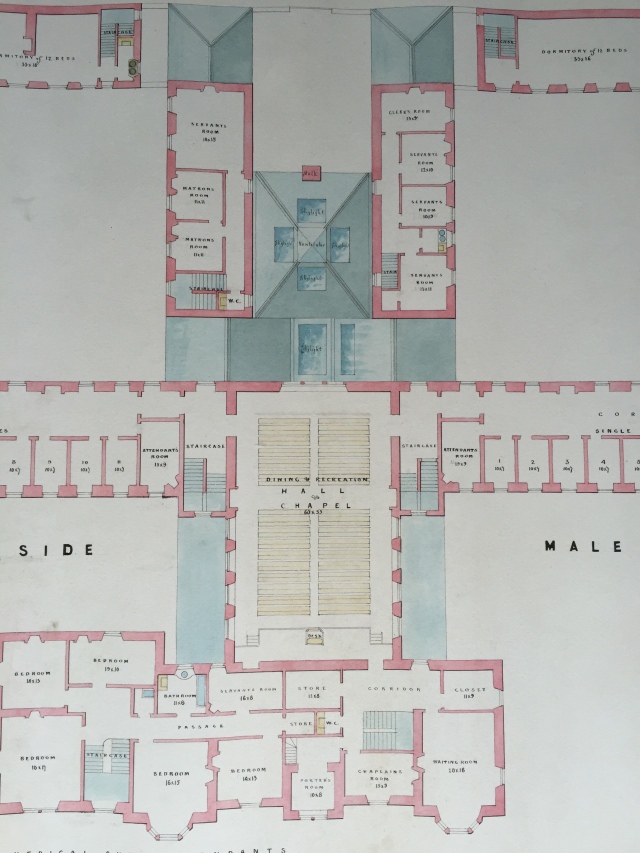 Detail showing the Dining Hall at the heart of the asylum. To the front is the entrance or administrative block, with the medical superintendent’s house on the left.

On the top floor were dormitories: four large rooms containing from twelve beds to fifteen beds. Just one bath again, and two water-closets.

The block plan shows how the accommodation was arranged. The airing yards allowed the patients to be segregated while taking exercise out of doors, and had access to the gardens around three sides of the building, shown laid out with some formality. [3] The medical superintendent has his own private garden, and there appears to be a separate garden in the corresponding position on the other side of the administration block, perhaps also for staff. What is not shown from this detail, is that the admin block faces north-west, the patients’ wings being orientated on a roughly west-east axis, with the single rooms on the north side and the corridors facing southwards.

I am an architectural historian, currently a PhD student at the University of Edinburgh, researching post-war hospital buildings in Scotland. From 1991 to 2018 I worked on the Survey of London. During the late 1980s and early 1990s I worked on surveys of hospital architecture in Scotland and England.
View all posts by Harriet Richardson →
This entry was posted in asylum, mental hospital, Scottish Hospitals and tagged architectural drawings, asylum, Ayrshire, Scottish Architecture, unbuilt Britain, unbuilt designs, William Railton. Bookmark the permalink.