In July 1991 Robert Taylor produced the second edition of The Hospitals Investigator, the newsletter he wrote and circulated to his five colleagues working on the RCHME survey of historic hospital buildings. Here he pondered Pest Houses, discussed deposited plans, and thought about (operating) theatres. In part 2b I will relay his discussion of ridge lanterns, sanatoria, and sewage works – we really knew how to enjoy ourselves.

“Pest houses have been emerging from the Suffolk countryside at an alarming rate. The name indicates a house, usually an ordinary farm house, which was used by the local authority as an isolation hospital in the event of an outbreak of infectious disease, usually smallpox but in some early cases the plague as well. Details of the arrangements must have varied, but it seems that the tenant had an obligation to either nurse the victims or to move elsewhere for the duration of the sickness. The latter was perhaps the more common practice in the seventeenth century. The possibility of such an arrangement was taken for granted in the 1875 Public Health Act, although the Local Government Board did not like ad hoc hospitals very much and put pressure on local authorities to provide specialised buildings. A very few pest houses remained in use in the first years of this century.”

“So far the Cambridge office has seen only three surviving pest houses, at Halesworth, Framlingham and Bury St Edmunds. The first was a standard three-cell two-storey farmhouse of the late seventeenth century, and remained the centre of a working farm until the land was sold away recently. That at Framlinhgam was an early seventeenth century two-cell house with central stack, and similarly showed no sign of specialised planning. Although reputedly built in 1665, the Bury pesthouse displayed nothing earlier than the eighteenth century, and was  a three-cell, single-storey house with internal stack. Other pest houses remain to be located at Eye, Nayland and Huntingdon, as well as a few less certain cases.”

I couldn’t find any photographs of these particular pest houses, though there will be photos taken by Robert and Kathryn in the relevant files in Historic England Archives. Here is a much smaller version in Hampshire at Odiham, where presumably, a small population did not require anything bigger. 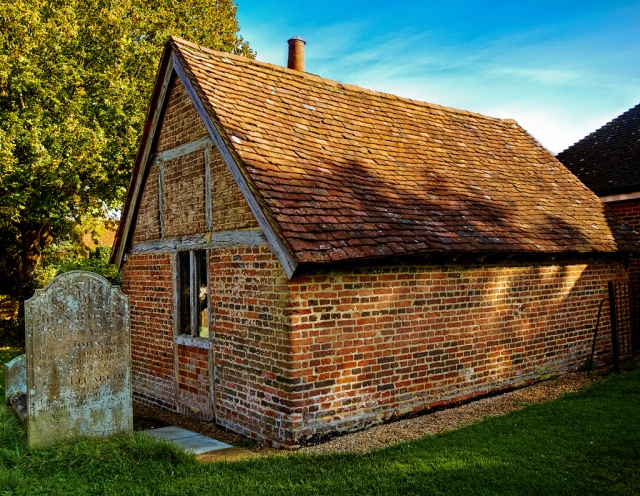 This 17th Century Pest (or Plague) House in Odiham, Hampshire is one of only five remaining in the country. Photograph by Anguskirk and licensed under CC BY-NC-ND 2.0

The Patrick Stead Hospital continues to function as a community hospital, and was designed as a cottage hospital by Henry Hall. It opened in 1882. 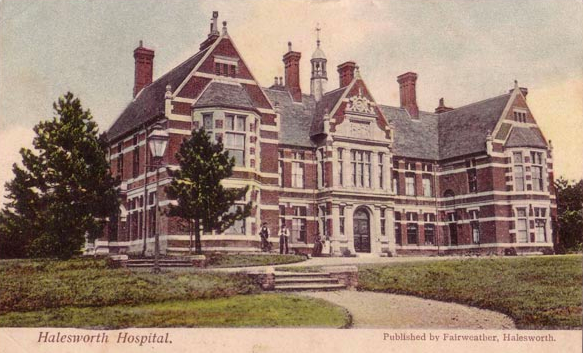 Above is a postcard showing the hospital, and below an elevation and plans produced in The Builder in 1880. Originally it provided a dispensary, outpatients’ clinic and accident ward, all on the ground floor, with further wards above. Patrick Stead set up a maltings business in Halesworth, and bequeathed a generous £26,000 to establish the hospital.

“Recently one of us was reading a letter written by an official of the Ministry of Health in 1926 when it suddenly became clear that the writer of the letter had in front of him a set of plans for an isolation hospital that had been sent to the Local Government Board in 1888 in connection with an application for sanction to raise a loan. Plans of isolation hospitals were deposited when an authority applied for permission to borrow money for hospital building, and also when the more responsible authorities voluntarily sought approval of their proposed hospital. The Local Government Board was replaced by the Ministry of Health, whose archive should contain these immeasurable riches, along with similar material for workhouses. Unfortunately most of the material dating from after about 1902 was lost in the blitz, and what survived that seems to have been mostly destroyed in a fire in Brighton. All that survives is at [the National Archives, at] Kew, hidden behind the catalogue code MH. The three main groups seem to be MH.12, MH.14 and MH.34.”

Reading this today, it is a reminder of how much researchers now gain from online digitised archive catalogues, and perhaps a lesson not to grumble about them (as I frequently do) when we can’t find what we’re looking for, they crash, they change, or they assault ones aesthetic sensibilities. 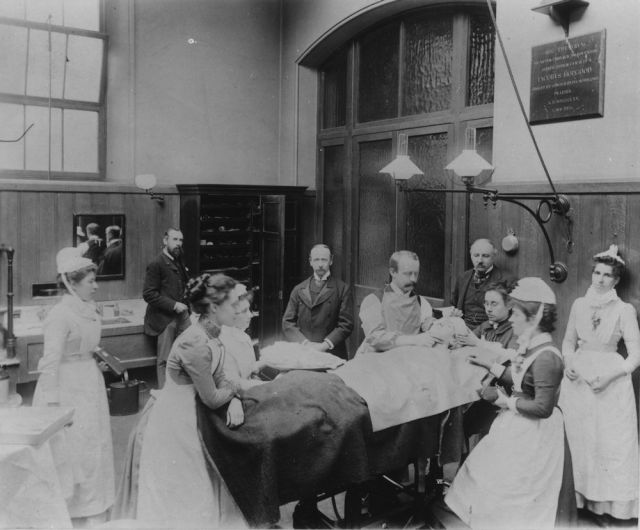 “One of the problems met in small hospitals is the identification of the jumble of buildings behind the main block. As in a mediaeval house the identification of the hall acts as a key to understanding, or at least knowing the rough layout of, the entire house, so one might expect that the operating theatre might stand out and give some help in finding a way through the maze. Unfortunately this does not always happen. Plenty of light was necessary, so a roof light is an important indicator. A large North-facing window is another but less reliable sign, and far too often the windows appear to be ordinary ones, the lower parts filled with obscured glass, as at Southwold. At Felixstowe the theatre has a semi-octagonal North end, like a sitting room, with ordinary-sized windows that are now blocked. The Beccles Hospital of 1924 has a magnificent but sadly un-photographable theatre with a North wall and roof of glass. Sometimes it is possible, if we are very tall or can manage to balance on tip-toe or on a convenient upturned bucket, to glimpse through the windows the white-tiled walls, or even the upper parts of lighting equipment.”

I am an architectural historian, currently a PhD student at the University of Edinburgh, researching post-war hospital buildings in Scotland. From 1991 to 2018 I worked on the Survey of London. During the late 1980s and early 1990s I worked on surveys of hospital architecture in Scotland and England.
View all posts by Harriet Richardson →
This entry was posted in architectural plans, cottage hospital, English Hospitals, isolation hospitals, operating theatres, Pest House and tagged archives, cottage hospital, heritage, hospital, infectious diseases hospital, pest house, Scottish Architecture. Bookmark the permalink.