The rest of Robert Taylor’s newsletter from July 1991 considered the richly varied topics of ridge lanterns, sanatoria, sewage works, pine trees, lunacy, and the grisly discovery of a body in a former hospital. I’m going to save the pine trees for a separate post, as I’d like to expand on the subject, (always leave the customers wanting more). For the rest, read on.

“At several hospitals there are buildings with rectangular lanterns on the ridge of the roof, giving light to the room below. These ought to have some diagnostic significance, but so far the Suffolk examples have given only rather vague guidance. The following uses have been noticed.”

(1) Laundries. Large examples, on big structures, usually close to the boiler house. Part of their function will have been to release steam and heat, but for that a normal louvred lantern was often adequate.

(2) Post-mortem rooms. These are relatively small examples, on small structures, and usually next to a mortuary… The function is to give top lighting to the dissection table. Curiously we have not yet observed them over an operating theatre. [see below]

(3) Store rooms. These are generally square or nearly square rooms, the equivalent of two storeys high, with racking or shelving inside on both ground floor and on a gallery defining a central light well. This well is lit by the lantern, as side windows would reduce the amount of shelf-space available, and so are generally absent. The only examples of this type of room so far seen appear to be of the twentieth century.

(4) Butcher’s shop. This is an unexpected building at the Suffolk County Asylum, dating from about 1902. Perhaps the top lighting is for similar reasons to that over a dissecting table. This stray example points to the fact that such top lighting is absent from all of the observed workshops at Suffolk workhouses and asylums.

Operating theatres at most hospitals did not have roof-ridge lanterns, but,for most of the 19th and early 20th centuries, large north-facing windows, with an element of top-lighting as they usually continued a little way into the roof.

Teaching hospitals, where there was a large operating theatre in which demonstrations could be made before students, or anatomy theatres, were sometimes lit by a roof lantern, such as William Adam’s Royal Infirmary at Edinburgh. A surviving example that has become a museum served the original St Thomas’s Hospital (before it moved to its present site opposite the House of Commons to make way for the expanding railways at Southwark) http://www.thegarret.org.uk.

“Amongst the Blue Books [Parliamentary Papers] is a Supplement in Continuation of the Report of the Medical Officer for 1905-6 on Sanatoria for Consumption and Certain other Aspects of the Tuberculosis Question  (1907.XXVII). Part Two of this breathtakingly-titled work is a survey of public sanatoria, with some illustrations. The following list gives the page number, and also the date of foundation. Those marked with a * have a published plan.”

This report of some 800-plus-pages not only has plans, but photographs, including interiors, and line drawings. As a group these sanatoria are some of the most attractive hospital buildings. One of the best known, the King Edward VII Sanatorium at Midhurst in West Sussex, designed by Adams, Holden and Pearson and with Gertrude Jekyll gardens, was fairly recently converted into luxury apartments. The chapel there is a cracker.

Another sanatorium with a great chapel and fine main building is at Northwood, Middlesex (in Hillingdon Borough, Greater London), part of Mount Vernon Hospital. The main building is on the Heritage at Risk Register. It was built as the country branch of the original hospital in Hampstead.

“There is a strange association between isolation hospitals and sewage works. It is not common, but frequent enough to be noticeable. Both share the ‘not in my back yard’ approach to siting and so are usually near the edge of the parish or, better still in the next parish. A splendid example of this is Peterborough, with a cluster of two isolation hospitals and a sewage works just over the border in the next county. Some time before 1898 the Aldershot Urban District Council built a galvanised iron smallpox hospital at the sewage farm, and by the end of the century had put a sewage workman in the building. Clearly smallpox presented less of a threat to human life than the sewage. In 1906 at Sheerness there was an interchange of buildings between the two types of institution, with the implication that the hospital was of less importance.”

Thorn Hill isolation hospital was in an enviable location, near the military cemetery and the gasworks, also handy for the railway, and that’s the edge of Mandora Barracks on the left. The quadrangular range of buildings just above ‘Round Hill’ formed an Army supply depot. This, the cemetery, barracks and government gas works all pre-dated the hospital.

“In the Suffolk Record Office at Ipswich is preserved from 1889 a sheet of paper from the archives of the County Asylum described succinctly in the catalogue as ‘Chart of daily rainfall and epidemic cases to show connections between monthly rainfall and cases of lunacy’.[ID407/B18/1] The idea that rainfall has a determining effect on madness has serious implications for our project. Should Cumbria have more or fewer lunatic asylums than rain-starved Cambridgeshire? Have the geographers missed something of crucial importance about the climate of Middlesex and the Home Counties? Perhaps our project will be able to make a valuable contribution to knowledge.”

Despite the well-known depressing effect of a grey and rainy day, and conversely the uplifting effect of sunshine, we never ‘did the math’ to see if there were higher numbers of certified insane per population in Cumbria than Cambridgeshire. The mere sight of some of the grimmer asylum buildings in the rain or otherwise would be enough to sink the spirits of even the most stout hearted, especially some of the earlier more prison-like institutions, such as Hanwell. 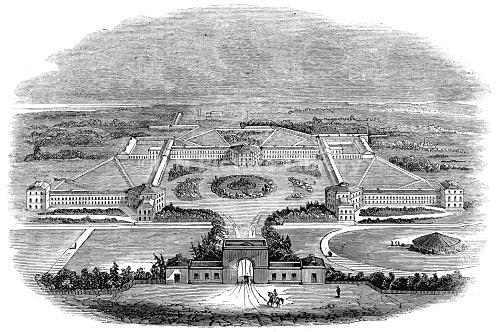 Hanwell was designed by William Alderson in 1828 as the Middlesex County Asylum, with accommodation for 300 patients. The hospital later became the St Bernard’s Wing of Ealing Hospital. It can be seen from the canal and from the railway line heading out from Paddington. That towering gateway seems particularly oppressive, it was added in 1839.

Wellcome Library, London, General Plan of the Pauper Lunatic Asylum for Middlesex, 1838  (licensed under CC BY 4.0)

“The Cambridge Evening News has at last caught up with the nefarious activities of Harriet and Colin. Under the above heading the newspaper reported on 18 July: ‘Police have launched a murder enquiry after finding the body of a man hidden beneath the floor of a disused London hospital, Scotland Yard said today… It was hidden under an aluminium air conditioning duct in a tiled cavity below a trap door in the Belgrave Hospital, Clapham Road, Kennington. A man and a woman each made anonymous calls alerting the police to the body. Det Supt John Bassett, leading the inquiry, issued an appeal for them to come forward.’

I must clarify, that it was not the London team that discovered the body at the Belgrave Hospital. Because of its condition at the time, we didn’t get access to the building at all, which was a great shame.  I think it is one of the finest hospitals, architecturally, of the late-nineteenth and early twentieth centuries. It was designed by Charles Holden and begun in 1899.

Listed grade II* in 198,  the hospital closed in 1985 and was in a poor state when we began fieldwork in 1991. It was converted into flats not long afterwards. More information and photographs can be on the Vauxhall Civic Society website http://www.vauxhallcivicsociety.org.uk/history/belgrave-hospital-for-children/ and at the Lost Hospitals of London site http://ezitis.myzen.co.uk/belgrave.html

One thought on “The Hospitals Investigator 2 (part 2)”