Back in 1991 a National Survey was commenced by the Royal Commission on the Historic Monuments of England to record English hospital buildings. It was undertaken by six men and women in three offices (in London, Cambridge and York). Robert Taylor, in the Cambridge office, produced a regular newsletter over the next three years, which thankfully, I have kept. The first instalment, produced in May 1991, explained that its purpose was to allow for the exchange of ideas and information that would normally take place over coffee. ‘Some form of communication seems needed which allows these ideas and observations  to be collected and disseminated without taking up time, and the new technology of the word processor seems to give one answer’, he wrote. I wonder if he might have written a blog had we been starting the project now? It is frightening to think how much technology has changed the way we work in such a short time.

Here is the content of issue 1, with a few additional notes on the sites mentioned.

A joint expedition of the York and Cambridge offices had been made to the Stour Valley visiting seven sites. At the time they thought that they had only managed six, but the following day discovered that Sudbury Workhouse, which they visited, was on the site of an 18th Century Pest House, which counted as a separate isolation hospital. It was demolished in 1836, so they would not have found any trace of it even if they had looked.

(Sudbury Union Workhouse later became Walnut Tree Hospital. A report, written in the early 1990s by either Robert or Kathryn Morrison, the other member of the Cambridge team, together with photographs, maps and research notes, were deposited in the National Monuments Record, now Historic England Archives, at Swindon, ref NBR 1000073. There is more information on the Sudbury Workhouse here http://www.workhouses.org.uk/Sudbury/  This aerial photograph taken in 1929 shows the workhouse with St Gregory’s Church behind.) 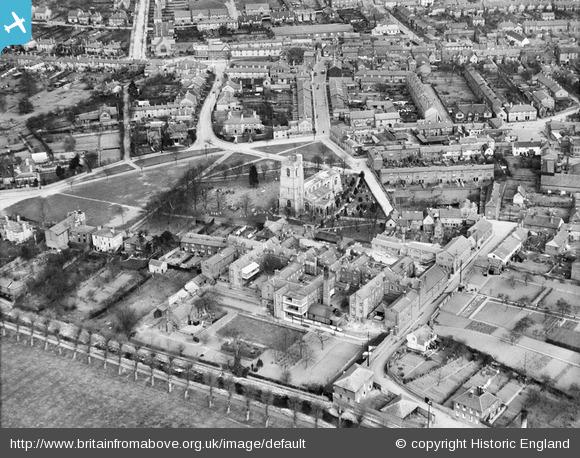 On 8 June 1926 the Board of the Newmarket and Moulton Joint Hospital “considered a complaint received from Mr G. S. Fuller of 9 Powells Row, Burwell, to the effect that his son who had been an inmate of the Hospital was bitten by the Matron’s dog in the hospital on the 21st march last.” The matron declared that neither she nor her staff knew of any such incident, and the Board duly asked the secretary to tell Mr. Fuller that he was mistaken. [Bury St Edmunds Record Office, ID 504/2, 369]

The amazing thing is not that a patient was or was not bitten, but that nobody questioned the possibility that a dog was loose in the wards. The staff response implied that if Master Fuller had indeed been bitten (which they doubted), then it was not by the Matron’s dog but by another unknown animal for which they accepted no responsibility. Perhaps the people of Exning, the parish in which the hospital was built, brought their dogs with them when they exercised the right to unrestricted visiting that they claimed, to the exasperation of the hospital’s staff. The Matron lived in a cottage in a corner of the hospitals enclosure, and does not appear to have had a separate garden.

(Newmarket Isolation Hospital was built in the late 1880s, and had an additional ward block added, probably for TB patients, in about the 1920s. This later ward block, along with the lodge and nurses home survive at the site, which was redeveloped as Beech House Hospital, a low secure unit for men with mental health disorders. The site report from the early 1990s, photographs and research notes, can be found at Historic England Archives, Swindon ref NBR 1000055)

The announcement of a proposal to build a ward or hospitals should always be regarded with extreme caution, as indicative of nothing more than an idea. An opening ceremony is the only reliable evidence that a building was actually started, for even the award of a contract can prove to be insecure evidence.

Both World Wars led to building works being abandoned either before or after commencement. Several cases of contracts being awarded before 1915 according to The Builder, and then being re-advertised some time after 1918 in exactly the same wording suggest that only the later contract should be regarded as indicating building work. A major war was not the only cause of delay, however. Municipal indecision, or criminal unwillingness to spend money, was another cause. Norwich Corporation was ready to build a Lunatic Asylum in 1866, with plans prepared and a site bought. Some researchers appear to have assumed that they went ahead immediately, but in fact they did not move until 1874, after the Secretary of State had taken mandamus proceedings against the corporation in order to force them into activity.

(The Norwich City Asylum changed its name to Hellesdon Hospital. It was designed by R. M. Phipson. An handsome admission hospital was added in 1934-6, designed by W. H. Town, single-storeyed with abundant verandas – though this block may have demolished. Research file and photographs at Historic England Archives, ref NBR 100570)

Considerable difficulties were experienced when trying to locate the Sudbury Isolation Hospital. Kelly gave a clear address in Friar Street, but when we looked at a map of the town it proved to be a corner house on one of the main streets. This was quite implausible as a site for an isolation hospital, especially as there was not even room in the garden for another building. Further research showed that this was the private house of the Medical Officer of the Corporation. Following another clue, the hospital was eventually located in a chalk pit on the outskirts of the town, a far more logical position. This sort of problem almost certainly accounts for the similarly ridiculous and otherwise unknown hospital on Newmarket Hight Street, which seems to be in reality the office address of the Secretary to the Joint Hospital Board.

Mortuaries were found to come in various shapes and sizes, and were not immediately obvious. ‘That at Lothingland Workhouse was an ordinary single-storey outbuilding’. In 1991 it was in use as the Caterer’s Store. For the most part mortuaries were detached buildings, although some model plans suggested combining them with the laundry. ‘Some have a wide entrance with double doors, but again some do not. Some are oriented, even given a chapel-like appearance with gothicky details, but again many are just storerooms. One had visible drains in excess of what might otherwise be expected, but that hardly seemed diagnostic.’

In 1879 the new Lunatic Asylum at Portsmouth was opened, and in the following year the Commissioners in Lunacy made their first annual inspection. They were pleased with what they saw and appear to have liked the beer that was brewed at the Asylum. They made a few suggestions for improvement, one of which was that there should be an upholsterers’ shop on the premises, worked by the inmates. The reason was not that this was currently fashionable occupational therapy, but that it was the cheapest way of maintaining the condition of the Asylum’s mattresses. [PP 1881 XLVIII, 365]

(The Portsmouth asylum became St James’s Hospital, which closed in the 1990s. The early 1990s report, photographs etc written by the Cambridge team, is in the Historic England Archives, reference NBR 100167. There is also a history with photographs here http://www.thinkingahead.org.uk/history/building.htm )

‘Of all the assorted almshouses that have emerged so far during the project, perhaps the most inviting so far is the Friendly Female Almshouse at Chumleigh.’

The former almshouses in Chumleigh Gardens, Burgess Park © Copyright Malc McDonald and licensed for reuse under this Creative Commons Licence

(These are those almshouses, though in fact at Chumleigh Street, in Camberwell. They were founded in 1819. Some of the buildings on the site were destroyed during the Second World War, the remainder now form Chumleigh Gardens, which house a café and meeting room.)