August 1992 saw the production of newsletter number five from the RCHME Cambridge office. There are snippets here about sanitary facilities – water closets and baths – and and more on temporary buildings. There are also useful indexes to information in the Parliamentary Papers, with reports on English provincial workhouse infirmaries by Edward Smith from 1867, and the enormously useful survey of hospitals in the United Kingdom carried out by Bristowe and Holmes in 1863.

In 1866 an inspector from the Poor Law Board visited the Hereford Union Workhouse in order to report on the infirmary. He found that the building was being greatly enlarged, and that two new wards were being built over the dining room. There was only one water closet on each side of the main building, at first floor level, but there were some other water closets in the yards that contained water aden were flushed twice or three times a week. The dry wording leaves one in doubt about the presence of water in the closets on the first floor. The rest hardly bears thinking about. 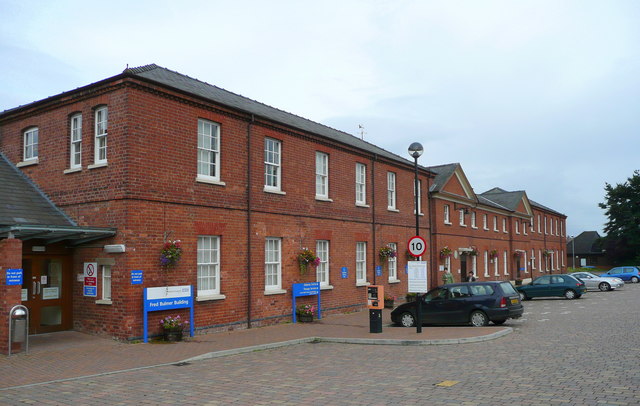 Fred Bulmer Building, County Hospital, Hereford, originally the Hereford Union Workhouse, built in 1834, it has been refurbished with the help of a legacy from a member of the cider-making dynasty.It is now a day hospital, which performs assessment and rehabilitation services. Photographed in 2008 © Copyright Jonathan Billinger and licensed for reuse under this Creative Commons Licence

The previous insalubrious snippet came from the Report (to the Poor Law Board) of Dr Edward Smith, 15 April 1867, on 48 Provincial Workhouse Infirmaries. It is published in Parliamentary Papers 1867-8 LX, pp 325 onwards. In these reports Dr Smith examined critically the provision for the sick, and gave a table for each workhouse examined, listing for each ward the dimensions, position of windows, number of beds and fireplaces, and present function. The only plan published is a block plan of Birmingham workhouse. {This was being demolished at the time the newsletter was written, in the summer of 1992.} One of the things that emerges from this report is that by 1866 rooms in workhouses were often used in a very different way from what was originally intended. Using the pagination of the original report rather than the imposed pagination of volume LX, the 48 workhouses are as follows:

The Portsea Island Union Workhouse Infirmary at Portsmouth was built in 1842 and extended in 1860 by an additional storey. {This later became St Mary’s General Hospital} Unfortunately we did not manage to get inside this derelict building, but we do know something of its internal arrangement. The wards on all three floors were on the South side of the range, and there was a corridor along the North side. The wards had windows on the external wall and also into the corridor (part of alterations of 1860), thereby providing cross-ventilation of an indirect kind; the corridor also had windows on the external wall. The internal windows had shutters, but we are not sure of the details. The Poor Law Board inspector in 1866 was not over-critical of this arrangement, for cross-ventilaiton was still a new hobby-horse for hospital reformers. A comparable arrangement of parallel wards with a common wall pierced by windows appears at the London Fever Hospital of 1848 and in the new Halford Wing of the Devon and Exeter Hospital built in 1854.

The acceptability of this internal ventilation provides a background to the roughly contemporary alterations at the Military Hospital at Devonport. This hospital was built as a series of pavilions in 1797, each floor of each pavilion consisting of two wards side by side separated by a corridor containing a staircase. The hospital was criticised in the 1861 report on military hospitals, and was subsequently altered. The stairs were removed and windows inserted in the walls between the corridor and the wards. Presumably there are a few other hospitals with wards ventilated through corridors, but they are unlikely to date from after the 1860s.

Appendix 15 of the 6th Report of the Medical Officer of the Privy Council for 1863 is titled Report by Dr John Syer Bristowe and Mr Timothy Holmes on the Hospitals of the United Kingdom. This report records the reactions of the authors to visits paid by one or both of them to what they believed to be all of the major hospitals in the Kingdom; it has a supplement of brief critical descriptions of 81 hospitals in England, and some sort of plan is published for 25 of them. The Report is Parliamentary Papers 1864 vol. XXVIII; Bristowe and Holmes’ appendix begins on p.467 as renumbered for the Blue Books (463 of the original pagination), and the supplement begins on p.575  (571 original pagination). The following list uses the titles for the descriptions of the hospitals, and the amended pagination. English hospitals were divided into metropolitan, provincial and rural; Scotland and Ireland were dealt with on pages 692 to 726.

The Hospitals Investigator No.4 drew attention to how many lunatics it was possible to get into one change of bath water. It now emerges that lunatics were not the only victims of this economy. At the Royal Berkshire Hospital at Reading in 1870 they managed to wash, if that is the correct word, at least eight patients in one change of water. The full number is not known, because it was only the eighth patient who complained. The reason appears to be that it took ten minutes to fill the bath and another ten minutes to empty it again, and the hospital porter did not have time to do this. 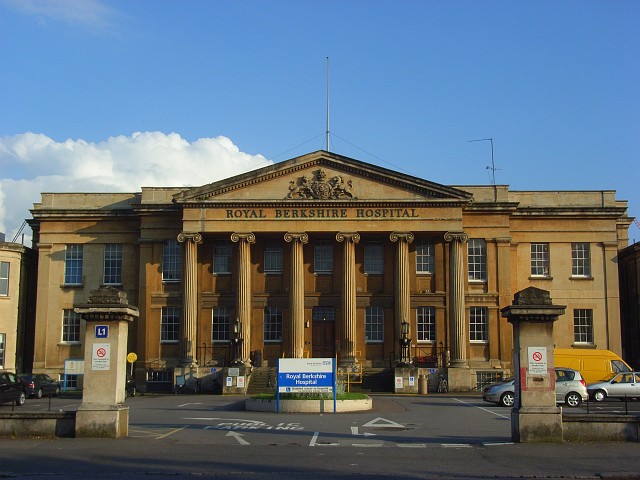 Royal Berkshire Hospital, Reading (© Copyright Andrew Smith and licensed for reuse under this Creative Commons Licence). Money spent on this fine stone front with its ionic portico and coat of arms in the pediment, may have lead to economies elsewhere, notably bath water.

Several firms are now known to have provided wood and iron hospital buildings, especially in the early years of he twentieth century, although their hospitals and chalets are hard to find or identify. So far the list includes the following:

Humphrey’s of Knightsbridge, (a catalogue of 1900 was located by the York office team). Several of their hospitals survive.
Boulton and Paul of Norwich, who were still in business (in 1992) selling garden shelters that are almost indistinguishable from sanatorium chalets. Early chalets have been found as far away as Plymouth. {The company was taken over in 1997}
Portable Building Company of Manchester, who provided a sanatorium for the Nottingham Association for the Prevention of Tuberculosis in about 1900.
Hygienic Constructions and Portable Buildings Ltd. who supplied the Homerton College Sanatorium in 1913. This weatherboarded building still (1992) stands.
Wire Wove Roofing Company of London made tuberculosis chalets.
G. W. Beattie of Putney advertised their New Venetian Shelter, for tuberculous patients, in 1913.
Kenman and Sons of Dublin, who sold tuberculosis chalets in 1913. 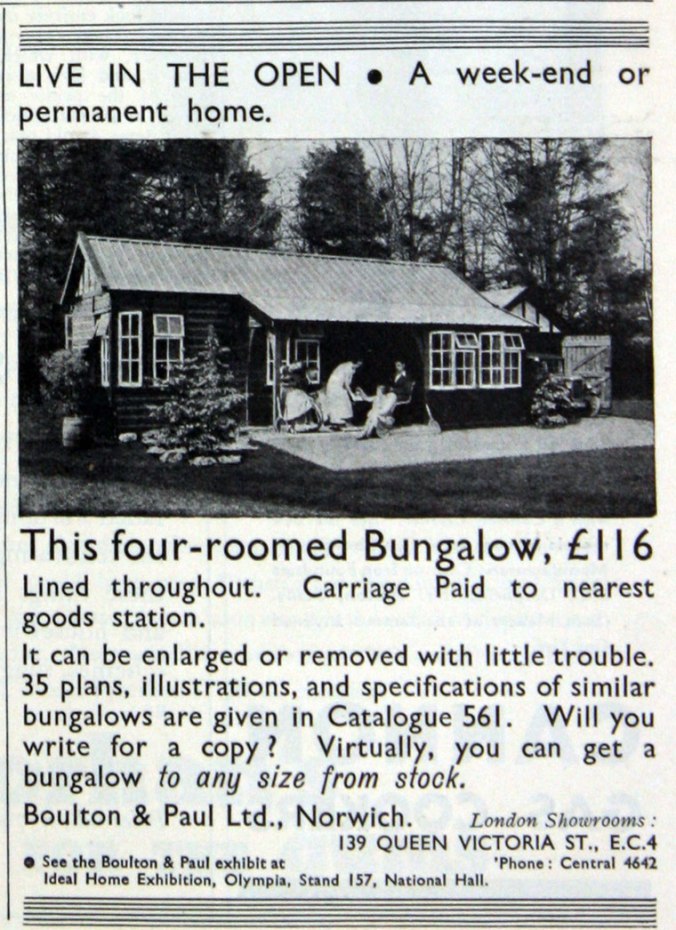 Not a hospital, but a temporary building that reflected the popularity of open-air living, this is taken from the rather wonderful Broadland memories blog