Dry January? Head for a Hydro! A brief look at Victorian hydropathic establishments in Scotland

Posted on January 1, 2016 by Harriet Richardson

After the feasting and convivial drinking over Christmas and the New Year, a dry January has become increasingly common. The adverse effects of alcohol on our health are widely known and understood today, as are the benefits of keeping well hydrated, preferably by drinking plenty of water. These twin truths go a long way to explain why hydropathic establishments and spas have survived long after other institutions offering specialist treatments have either disappeared or remain rare.  Sea-bathing, anti-vivisection, galvanic, and mesmeric hospitals all had their promoters and supporters from the eighteenth into the twentieth centuries, though widely condemned by the medical profession. But a water cure, particularly if it was balanced with exercise in country air and abstinence from alcohol, did few any harm and benefitted many. 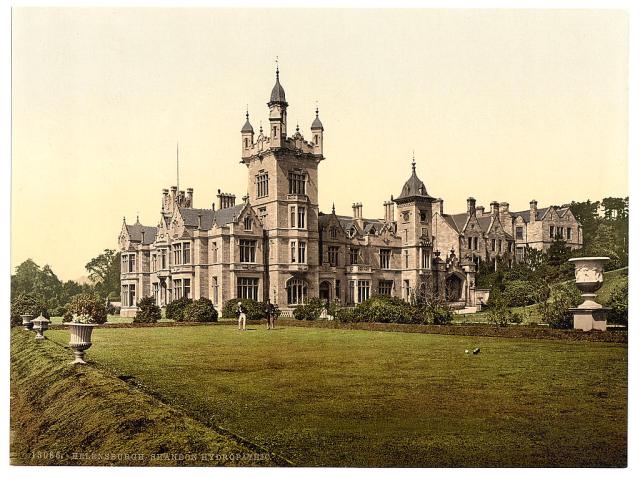 Shandon Hydro, Helensburgh, image from National Library of Congress. West Shandon House, built in 1851, was altered and greatly extended by Peddie & Kinnear in the 1870s to turn it into a fairy tale castle of a hydropathic establishment.

Spas and Hydropathic establishments are generally set in attractive locations, occupying imposing buildings, and have not been neglected by historians. Health tourism has been studied both from an architectural and historical perspective in recent years. [1] Hydros had their heyday in Scotland in the later nineteenth century, the Shandon Hydro at Helensburgh and the Dunblane Hydro were both built to designs by Peddie & Kinnear in the 1870s. By that time they had become popular as health resorts and were often closely linked to the temperance movement. They attracted the healthy as well as the invalid, and water treatments began to subside in importance. Unsurprisingly, in terms of architectural planning later hydros were little different from hotels, only the treatment rooms set them apart.

The water cure had been introduced into Britain from the Continent in the mid-nineteenth century, as a separate medical strand from taking the waters at a Spa. For the water cure primarily concerned water as an external treatment, with baths, douches and other inventive ways of applying water to the body. Hydropathy was big business in England and Wales before it gained much ground in Scotland. The first hydropathic establishments north of the border were small, located at Rothesay, Dunoon and Aberdeen. [2]

Graefenberg, Hydropathic Establishment of Vincent Priessnitz, from the Wellcome  Library reproduced under under Creative Commons Attribution only licence CC BY 4.0

At Rothesay the hydro was set up in 1843 by Dr William Paterson who had visited Vincent Priessnitz, the founder of the water cure movement, at Graefenberg. Paterson’s hydropathic establishment occupied Glenburn House, overlooking Rothesay Bay on the Isle of Bute. The house was converted to provide accommodation for just ‘a few invalids’. [2] Unlike Priessnitz, Paterson combined the ‘judicious use of medicine’ alongside cold water in his treatments. The hydro was successful and underwent a number of additions before it was rebuilt in the 1890s following a fire. [3]

Glenburn Hydro, Rothesay from Wilson’s Guide to Rothesay and the Isle of Bute, 1848

The short-lived hydro at Dunoon was established in 1846 by another Scottish doctor who had been directly inspired by Priesstnitz, Dr Rowland East. It too was in a converted house, which was situated near the recently built Kirn Pier, on the banks of the Clyde. Here water treatment was combined with a regime of sea-water bathing.  The third hydro, opened at Aberdeen in 1850, was perhaps the most influential, but it was begun not by a doctor but a churchman, the Reverend Alexander Munro. Munro belonged to the Evangelical Union, and his interest in hydropathy was very much a product of his faith, providing scope for ministering to both the physical and spiritual needs of his flock. [4] 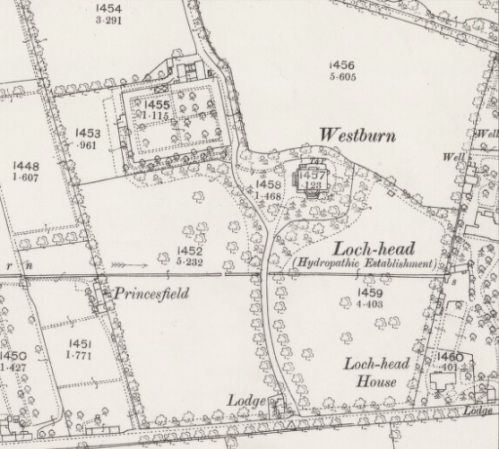 Extract from the 1st edition OS map, surveyed in 1867, showing the Aberdeen hydro at Loch-head, (just west of the Royal Lunatic Asylum). Reproduced by permission of the National Library of Scotland. Alexander Munro moved the hydro here in 1853 from Angusfield, where he had begun his hydropathic establishment in 1850.  [5]

Munro’s Aberdeen hydro proved sufficiently successful to warrant additions to the house at Loch-head. He built a new wing ‘of three storeys, two of these having fine oriel windows’. The new wing contained a dining room, drawing room and recreation room in addition to further bedrooms. Later he added a Turkish bath, in moorish style. In 1864 Munro left for the new Cluny Hills Hydro and his position at Loch-head was filled by Dr Meikle, for whom it proved a stepping stone to founding a new purpose-built hydro at Crieff.

The Allan Water Hydropathic establishment was built in 1861-4 to designs by a lesser Glasgow architect James Hamilton, and was an early work in his career. Soon after he was commissioned to design the West of Scotland Seaside Home at Dunoon (later remodelled as the Dunoon Hydro), the Glasgow Hydropathic and Turkish Bath, and possibly desinged extensions to the Glenburn Hydro, Rothesay. James, his son John and grandson Arthur were all closely associated with Rothesay and designed a number of villas thereabouts.

The Hydro at Crieff is possibly the best known Scottish hydro, and one of the few to survive as a hotel to this day. It was first opened as the Strathearn Hydro in 1868, built for the not inconsiderable sum of £30,000 and founded by Dr Thomas Henry Meikle, on the back of the success of the Loch-head hydro at Aberdeen. The original building was designed by Robert Ewan, an architect and engineer who was commissioned in 1866 while still working as an assistant architect to J. Russell Mackenzie in Aberdeen. The early success of the establishment is attested by the almost immediate need to extend the accommodation, first with attic bedrooms in 1872, then in 1875 the dining and drawing rooms were extended. Further substantial additions were made in 1888 and 1894, and a winter garden was added in 1903-5. Ewan and his architect sons, Robert and Charles, were retained for these additional works. They were not foremost amongst Scottish architects, and the hydro is not the finest piece of architectural design, but it has distinct charm and a lively roofline of turrets and gables.

The Winter Garden from Strathearn Hydro’s souvenir brochure produced in the 1950s.

During the Second World War the Strathearn Hydro at Crieff was requisitioned by the army, it partially re-opened in 1949 and after refurbishment a souvenir brochure was produced to entice new visitors and encourage former guests to return. It advertised various sports: golf, tennis and croquet out of doors, billiards and a swimming-pool in doors. It also boasted 58 separate ‘lock-up’ compartments for motor cars. The medical side had not been entirely abandoned, there was a physiotherapy department, which it was hoped would prove increasingly helpful in the treatment of rheumatism ‘and in the restoration of function’. [6]  It remained dry, though, until the 1970s, when the management finally applied for a table licence. [2]

I am an architectural historian, currently a PhD student at the University of Edinburgh, researching post-war hospital buildings in Scotland. From 1991 to 2018 I worked on the Survey of London. During the late 1980s and early 1990s I worked on surveys of hospital architecture in Scotland and England.
View all posts by Harriet Richardson →
This entry was posted in English Hospitals, hydropathic, Scottish Hospitals and tagged Aberdeen, architecture, Bridge of Allan, Crieff, Dunblane, Hydropathic Hotel, medical history, Peddie and Kinnear, Scottish Architecture, Spa, water cure. Bookmark the permalink.