Lennox Castle in 2014, photographed by Robert Adam at RCAHMS One of a series of aerial photographs of the site

Lennox Castle has been on the Buildings at Risk register for Scotland since 1992, the website provides a good summary of the history of the building and the site. Rather wonderfully, the Book of Lennox Castle produced for the opening ceremony of the hospital in 1936 has been scanned and put online by S J McLaughlin, who has charted the history of the hospital and includes numerous photographs. Records from the hospital are deposited with NHS Greater Glasgow and Clyde Archives.

An extraordinary aerial photo  posted early in 2014 shows part of the site after the patients’ blocks had been demolished. In 2006 planning permission was granted for this area to be developed as the Celtic FC training centre. Below is an aerofilms photograph, taken from the north in 1953, showing Lennox Castle on the right, and the former female division to the left. But this was only a part of the hospital site overall. The OS map from 1958 shows the other sections of the hospital. At this date the blocks to the north-east formed a separate maternity hospital.

Aerial photograph 1953 in the collection of RCAHMS

The aerial photograph of that section of the hospital (below) was taken in 1953. It was turned into a maternity unit in 1941, as part of the Emergency Medical Scheme during the Second World War and continued as such until 1964. All the buildings were demolished to make way for a housing development, for which planning permission was granted in 2006. 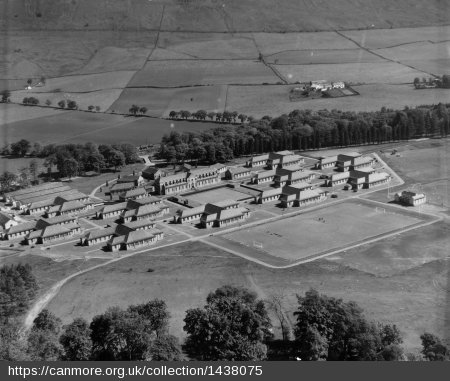 Aerial photograph 1953 in the collection of RCAHMS. This shows the former male division which became an emergency hospital during the Second World War and partly used as a Maternity Hospital.

Below is a revised version of the piece I wrote on the hospital around 1990. I remember the hospital quite well, it was one that was particularly impressive, architecturally and for its setting. It was quite a shock to see what has happened since.

LENNOX CASTLE HOSPITAL, LENNOXTOWN   Lennox Castle, situated at the western edge of the hospital complex, was built between 1837 and 1841 to designs by David Hamilton. 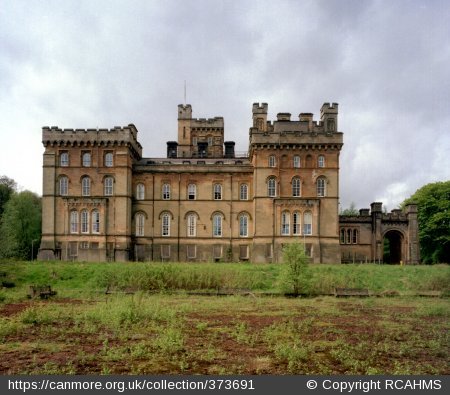 Lennox Castle, before it became a roofless ruin, photographed by RCAHMS

It was designed in a picturesque neo‑Norman style with castellated and battered walls, and an imposing porte‑cochere. In the 1980s there were some fine interiors on the principal floor but the building had suffered badly from subsidence. The external stonework was also in very poor condition near the ground and had been roughly patched up with concrete rendering. 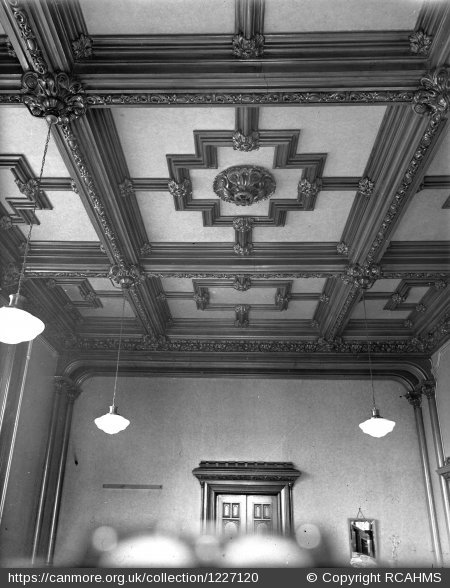 View of the dining-room ceiling at Lennox Castle, photograph from RCAHMS, nd.

In April 1925 Glasgow Parish Council resolved to build a new Mental Deficiency Institution under the provisions of the 1913 Act. In 1927 Lennox Castle and its vast estate were purchased, and plans prepared for what was to be the largest and best equipped hospital of this type in Britain. It was to provide 1,200 beds at a cost of 1.25 million. Work began in 1929 to designs by Wylie, Shanks & Wylie. The hospital was finally completed in 1936. The site was divided into five sections; a male division, a female division, a hospital section, married staff houses and the engine house. The male and female sections each consisted of ten dormitory blocks for 60 patients. These were split into two main wards with 28 beds and two side rooms with two beds, together with a day‑room and sanitary annexe. Meals were to be provided in two central dining‑halls capable of seating 600 patients each. Above the dining‑hall, accommodation was provided for unmarried male attendants.

Lennox Castle itself was adapted into a nurses’ home. There was also a central Assembly Hall for all the patients, it contained a large hall with a stage and equipment for cinema shows as well as some administrative offices. All the new blocks were built of brick and incorporated many innovative features, in particular the heating system which operated on a system of underground tunnels.

There was a considerable variety of plan and composition which added interest to the site. The Assembly Hall and dining‑halls featured arched windows on the ground floor and each had a central bold entrance bay. On the Assembly hall this comprised a grand arch rising the full‑height of the building and framing the porch, and on the dining‑hall blocks the door was set into an arch, which in turn was in a tall gabled centrepiece. The varied roof-line also added interest. A charming octagonal tea‑room in two tiers with plenty of windows, echoed the tea pavilion at Glen‑o‑Dee Hospital.

Lennox Castle Maternity Hospital and Institution, from the OS map published in 1958. Reproduced with permission of the National Library of Scotland.

During the Second World War the male division (on the map below) was taken over by the government for use as an Emergency Hospital and the male patients were moved to six of the villas in the female division and hutted ward blocks that were constructed near the Castle. Although intended for air raid casualties, the emergency hospital was not needed and so the beds were made available to relieve pressure on hospital accommodation in Glasgow. A post-confinement maternity unit was established at the site in 1941, initially in one villa consisting of three wards, plus another villa that was reserved for gynaecology cases.

The Maternity Hospital from the OS map revised in 1966, after it had ceased to take maternity patients. Reproduced with permission of the National Library of Scotland.

Although Lennox Castle was twenty miles from Glasgow, the maternity provision here, with its beautiful rural surroundings, proved very popular. Initial space for 30 patients was soon increased to 60 by using another villa. A certain number of women each week were transferred after confinement from one or other of Glasgow Corporation’s maternity units. The increasing demand for maternity beds in Glasgow was becoming harder to meet. In 1942 the total number of maternity beds available in voluntary and municipal institutions was 461, including ante-natal beds. In addition there were about 150 in nursing homes, and 44 beds for unmarried girls in four private homes. An extension of 32 beds was made at the Eastern District Hospital, and under the government evacuation scheme beds for expectant mothers were available at Haddo House, Peebles, Kilmacolm and Airthrey Castle.

Further beds were made over for maternity cases at Lennox Castle during and after the war. In 1960 work began on a new maternity hospital at Yorkhill, and additional beds were  provided at Redlands, and Robroyston Hospitals, and pavilions at Belvedere Fever were converted to maternity use, but there were still not enough beds to meet demand. Lennox Castle continued to provide maternity beds until 1964 when the Queen Mother’s Hospital at Yorkhill was completed. [Sources: Glasgow Corporation, The Book of Lennox Castle, Glasgow, c.1936. Glasgow Herald, 15 May 1936, p.12; 29 Sept. 1936, (ill.): RCAHMS, Inventory, Stirling, Vol.2, p.358.]

I am an architectural historian, currently a PhD student at the University of Edinburgh, researching post-war hospital buildings in Scotland. From 1991 to 2018 I worked on the Survey of London. During the late 1980s and early 1990s I worked on surveys of hospital architecture in Scotland and England.
View all posts by Harriet Richardson →
This entry was posted in asylum, country house, Maternity Hospital, mental hospital, Scottish Hospitals and tagged architecture, asylum, country house, hospital, Maternity Hospital, municipal hospital. Bookmark the permalink.