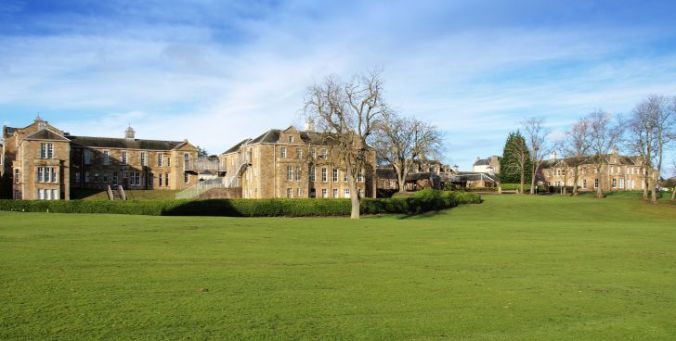 Stratheden Hospital from the south, photographed in October 2014 by MacKlly (image reproduced under CC0 1.0 Universal)

Stratheden Hospital is administered by NHS Fife as a community hospital caring for patients with mental health issues. Most of the patients’ accommodation lies within the grounds of the Victorian hospital complex (pictured above), which was originally built as the Fife and Kinross District Asylum for Pauper Lunatics. The old buildings, deemed no longer fit for purpose, have been lying empty for the last three years or more, and are not designated as listed buildings. 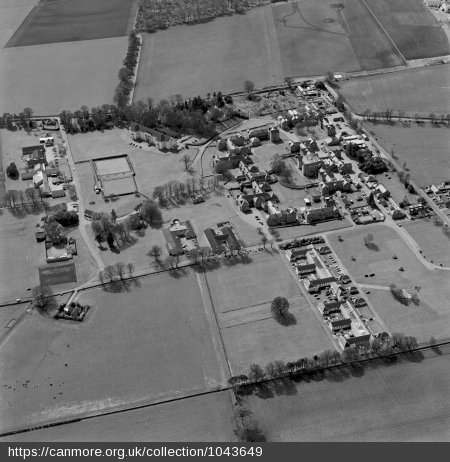 The aerial photograph from 2001 shows the site as it was then, with the historic core on the top right. New buildings added to the site in recent years have been built in the open space to the east – just below the original buildings on the photograph. The newest addition to the site is an 8-bed Intensive Psychiatric Care Unit (IPCU). On 6 July 2015 work was officially commenced on its construction, with Nicola Sturgeon joining the NHS Fife chief executive Paul Hawkins in a sod-cutting ceremony. 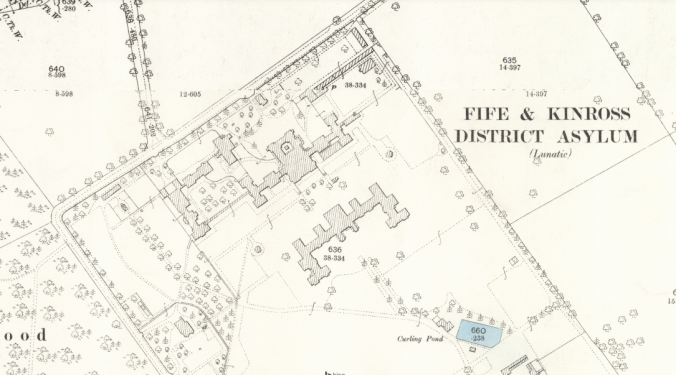 Extract from the 2nd edition OS map, surveyed in 1893, reproduced by permission of the National Library of Scotland.

The oldest buildings on the site were designed in 1860 by Peddie and Kinnear, as the district pauper asylum for Fife and Kinross. The site had been acquired from a Mr R. Wilson of Cupar, comprising a large estate around a house named Retreat – rather apt. But the house seems to have been demolished to make way for the farm steading. The architects were awarded the commission following a limited competition in which Brown and Wardrop were the only other architects invited to submit plans. Peddie and Kinnear had themselves unsuccessfully competed for the design of the Inverness District Asylum the year before, and in 1860 produced plans for Haddington District Asylum. Earlier they had designed a number of poorhouses, and so were well versed in the complex requirements of such large institutions. 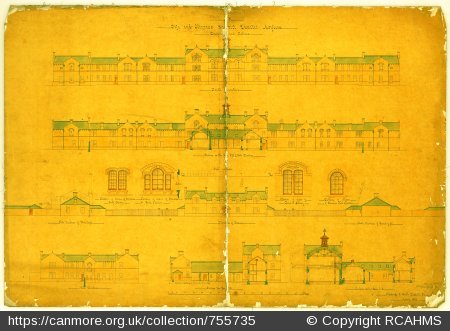 Building work suffered various delays and only began in 1863, with the foundation stone being laid in August 1864. The delays were largely due to Lord Kinnoul whose amendment to the Lunacy (Scotland) Act allowed pauper lunatics to be accommodated in poorhouses. He was energetic in lobbying the Lunacy Board in an attempt to dissuade them from proceeding with the Fife asylum until the Bill was passed in 1863. However, the accommodation for lunatics generally provided in poorhouses was unsuitable and insufficient. As soon as Stratheden was completed the Commissioners in Lunacy withdrew the licence to keep lunatics in Dunfermline Poorhouse.

The asylum was described in the Commissioners’ annual reports as being of ‘plain and economical construction’ with a separate house for the Medical Superintendent and a porter’s lodge. In 1865 it was noted that: ‘the whole of the main building is roofed in excepting the centre block, containing the dining‑hall, amusement room, etc, the roof of which has been delayed in consequence of the iron beams required for its support having been lost at sea.’ 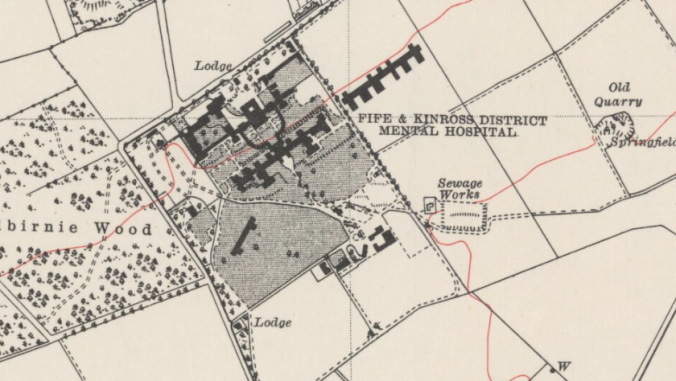 Extract from the 6-inch OS map, revised in 1938, reproduced by permission of the National Library of Scotland. The map shows the original block on the north side of the complex which by this date had been considerably extended.

Stratheden Hospital was opened without ceremony on 4 July 1866 for 200 hundred pauper lunatics; the Fife Herald noted that the first patient to be admitted was a woman ‘who stared considerably at the sight of the palatial display and who had ultimately to be forcibly introduced to a home in everything but name’. Just before the asylum opened it was inspected by two of the Commissioners in Lunacy, an event that was reported in the Fife Herald with considerable local pride. The warm sunshine and strong breeze of wind on that late June day meant that the means of ventilation were well exercised, ‘imparting to the asylum a fresh and delightful odour, such as is only to be found in green fields and rural scenes’. [Fife Herald, 21 June 1866] 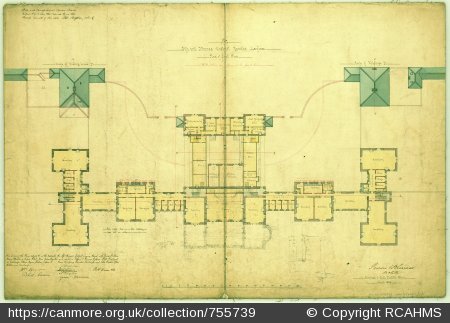 Upper-floor plan by Peddie & Kinnear, one of a set of plans by the architects in the NMRS collection

Fife and Kinross asylum was up-to-date in its provision of a mix of single rooms and larger dormitories and day rooms for the patients. It boasted no architectural display, efficiency with economy being the requirements of the Lunacy Board. With a frontage of 410 feet, the main building was symmetrical, males occupying the east, the females the west side. The end wings were for infirmary and refractory patients on the ground floor with quiet and convalescent patients above. At the centre was the dining-hall and a recreation hall that was also to serve as a chapel, the usual arrangement at this date. On the north side, the two-storey range at the centre contained the main entrance, reception rooms, a laboratory and staff offices.

Amongst later additions, a hospital block was added by Kinnear and Peddie in 1891 and a large new nurses’ home, designed by Andrew Haxton was built in 1929. [Sources: Commissioners in Lunacy, Annual Report, 1865: RCAHMS drawings collection]