Posted on February 27, 2016 by Harriet Richardson

A recent e-bay purchase has prompted this brief post. I was drawn to the attractive tinted postcard showing this monumental hospital complex, and tickled by the short statement the sender had written on the back:
‘This is all one hospital, grand don’t you think’.

Much of the range fronting College Street survives, but was sold off by the hospital to the MaRS charitable trust around 2002. The impression from the postcard of gleaming white buildings turns out to be misleading, as they were built of a warm honey coloured brick with stone dressings. Perhaps the producer of the postcard, Valentine & Sons United Publishing Co. Ltd, was responding to contemporary comments on the choice of material – the brick came in for a good deal of criticism from ‘the man on the street’ while the buildings were going up. Valentine & Sons have corrected the error of the architect by painting the hospital white. [1]

The entire complex was designed by the Toronto architects Darling & Pearson, Frank Darling as executant architect. Darling had designed other hospitals, but was not the best-known hospital architect in Canada so the choice was not without controversy. However, from the time when the foundation stone was laid by Earl Grey, Governor General of Canada, on 11 April 1911 it took just two years to complete the buildings which opened in 1913.  The main range pictured above faced north on College Street with a frontage of around 620 feet, the administration block with its central domed tower was flanked by the medical and surgical sections (to the west and east respectively). 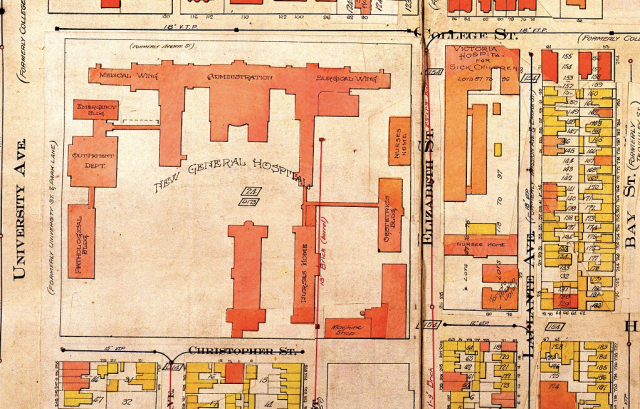 Goad Fire Insurance plan from 1924, showing the extent of the hospital before expansion in the later 1920s. Reproduced by courtesy of Toronto City Archives

In all it was planned to accommodate nearly 700 patients. Three-storey ward pavilions extended southwards from the main range and had  24- and 16-bed wards on each floor as well as numerous smaller wards for different cases, at the south end were sun balconies or verandas. The separate blocks to the south included the square outpatients department and pathology department on the west side fronting University Avenue, and nurses’ home,  and obstetrics building on the west side.

Toronto General Hospital view from the roof of Elizabeth Street School, across to the main building (right) with the Private Patients’ pavilion to the left. Reproduced courtesy of City of Toronto Archives. Fonds 200, Department of Public Works photographs 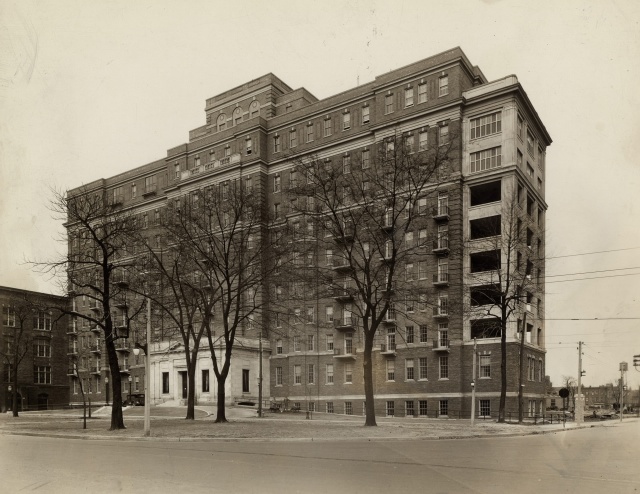 A large and significant addition to the site was made in the late 1920s in the shape of the new pavilion for private patients. This giant T-plan building providing 321 private rooms, was erected on the south-east corner of the site. It was fitted up in the style of a well-appointed hotel, with soft furnishings unthinkable in a charity or municipal hospital. The aim was to attract patients whose fees would contribute not just to the pavilion but the entire hospital. [2]

I am an architectural historian, currently a PhD student at the University of Edinburgh, researching post-war hospital buildings in Scotland. From 1991 to 2018 I worked on the Survey of London. During the late 1980s and early 1990s I worked on surveys of hospital architecture in Scotland and England.
View all posts by Harriet Richardson →
This entry was posted in Canadian Hospitals and tagged Frank Darling architect, general hospital, historic photographs, MaRS Discovery District, Private Patients' Hospital, teaching hospital, Toronto. Bookmark the permalink.