In December 1992 Robert Taylor circulated the ninth edition of his newsletter amongst his colleagues working on the Royal Commission’s hospitals project. In this issue he provided more useful source material on isolation hospitals from Parliamentary Papers: a ‘Sanitary Survey’ undertaken in 1893-5  and the annual report of the Local Government Board of 1914-15, which highlighted the problems encountered in municipal hospital provision during the first year of the war.

The Sanitary Survey covered England and Wales and was prompted by ‘the ever recurring source of danger’ to Britain of cholera spreading from the continent. Publication of the inland survey was delayed following a ‘serious accident’ which befell Dr Frederick W. Barry, Senior Medical Inspector of the Local Government Board, who was supervising the work. A year later he died suddenly, it was presumed from the injury he sustained. The inland survey followed one on the ‘Port and Riparian Districts of England and Wales’ submitted in September 1895. When attention was turned inland, districts where the purity of the water supply was in doubt were investigated as a priority and then districts in which the administration was believed to be defective or ‘in which former experience had shown that filth diseases prevailed’. 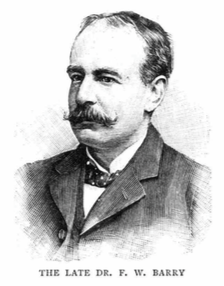 The late Dr F. W. Barry, from The Graphic, 23 Oct 1897, p.17. Barry had struck his head on a stone doorway causing severe injury to his skull the previous year. He died  suddenly after he had retired to bed at the Grand Hotel, Birmingham, and was found the following morning by the chambermaid.

The actual work of inspection was conducted under Barry’s supervision by a team of doctors in the LGB Medical Department. The bulk of the sites were covered by Dr Bruce Low, Dr Fletcher, Dr Reece, Dr Wilson, and Dr Wheaton, a few were inspected by the late T. W. Thompson, Dr Sweeting, Dr Theodore Thomson, Dr Coleman, Dr Bulstrode, Dr Horne and Mr Evan Evans (surely one of the inspectors of Welsh hospitals). Each inspector was given a set of forms containing questions as to the general sanitary circumstances of the district, its sanitary administration and cholera precautions.

Under the first of these three headings the inspectors were to report on the condition of dwellings and their surroundings, the purity and sufficiency of the water supply, the efficiency of public sewage, domestic drainage and sewage disposal, methods of excrement and refuse disposal and removal, and the condition and nature of supervision over registered premises and trades. As regarded ‘sanitary administration’ the inspectors were to report on the general character and efficiency of the administration of the local sanitary authority, noting the bylaws, regulations and adoptive Acts in force. They were also to report on the work done by the local Medical Officer of Health and Inspector of Nuisances, and on the provisions made for dealing with infectious diseases and ‘infected articles’.

As to ‘Cholera Precautions’ the inspectors were instructed to ascertain what general arrangements existed in each district to deal with an outbreak of cholera and what special arrangements had been made for action in an emergency. Detailed reports were made and submitted to the local sanitary authorities together with recommendations for improvements. Only the detailed reports for Sunderland were reproduced in the Report, for the other districts abstracts were published.

The inspection of the County Borough of Sunderland was made on 19 April 1894, the district covered Sunderland, Bishopwearmouth, South Bishopwearmouth and Monkwearmouth with a population in 1891 of 131,015. The chief industries were shipbuilding, engineering, mining, seafaring and glass-blowing. The sewers are described in detail and house drainage. There were an estimated 4,000 water closets and 1,100 ‘tub closets’ (galvanised iron tubs) in the district, but the majority of houses used privy middens which were found to be mostly of a ‘very defective type’. The local Medical Officer of Health was John Caudell Wood, who was paid a salary of £500 p.a. with an additional £20 as Port Medical Officer of Health and £5 as Public Analyst. He was described as having a good knowledge of his district but ‘wanting in judgment’, and therefore ‘cannot be regarded as a very satisfactory officer’.

Extracts from the 6-inch OS map of Sunderland published in 1898. Reproduced by permission of the National Library of Scotland

Sunderland Isolation Hospital was found to be a good brick building for 42 patients, situated on an isolated site about two miles north-west of the Town Hall. (This is probably what became Havelock Hospital east site, formerly Sunderland Borough Infectious Diseases Hospital, the west site being formerly the infectious hospital for Sunderland Rural District, situated to the west of Bishopwearmouth cemetery on Hylton Road.) It had been built in 1890, and consisted of two fever pavilions each for 16 beds designed generally on the lines of Plan C of the LGB 1892 memorandum, and an isolation pavilion for 10 beds on the lines of Plan D in the 1888 memorandum. There was also an admin block, with accommodation for 11 nurses and 9 servants as well as a medical officer and matron, a mortuary, post-mortem room, laundry, and disinfecting house.

Emergency plans included arrangements for opening the ‘House of Recovery’ as a cholera hospitals, this had been the old borough fever hospital a the end of Dunning Street near the river and could take about twelve patients.The following is Robert Taylor’s  list of the English isolation hospitals noted in the report. The page numbers are those given in the Blue Books, not the report’s pagination. There are some oddities: Bishop Auckland Urban District’s isolation hospital was in converted dog kennels, while at Lyme they set aside a room in a warehouse on the Cobb. At Dudley they had built a hospital comprising three blocks and a tent on a pit mound, which the inspector described as ‘very bad’. It supposedly only had space for six patients, although it had been used for 23 smallpox patients.

The ‘Report on the Inland Sanitary Survey, 1893-95’, by the late F. W. Barry, undertaken for the Local Government Board was published in Parliamentary Papers 1896 XXXVII, pp 669ff. Just how Mr Barry met his death is not recorded, but we trust that it was not a direct result of the time spent investigating hospitals. He presented, albeit posthumously, a series of short descriptions of a sample of infectious diseases hospital visited between 1893 and 1895. A list and summary may be of some use, even if only to show what sort of buildings are missing from our own survey a century later. The abbreviations used are familiar – UD for Urban District, B for Borough, CB for County Borough.

The Annual Report of the Local Government Board for 1914-15 (P.P. 1914-15 XXV, 29-30) gives some interesting information about hospitals. It is also interesting for referring to the conflict as the Great War as early as 1915.

In the early months of the First World War, it was discovered that the existing isolation hospital accommodation was often insufficient for the extra military population of the area. This was particularly the case in Eastern Command. In some districts, huts of an army pattern were built in the grounds of existing isolation hospitals by agreement between the local military and the hospital authorities. It was intended that after the war the local authority would buy the building from the military at a percentage of the original cost. These huts did not provide floor space to the requirements of the Local Government Board, and after a meeting with the Board, Eastern Command adopted a design by their architect which was a modification of the Board’s Model D of the Memorandum of May 1902. The pavilion had two ten-bed wards and two one-bed wards, was 24 feet wide, and provided 144 square feet of floor space for each bed.

Folkestone Isolation Hospital. The two blocks added during the First World War are the pair to the south. Extract from the 2nd edition OS map revised 1937-8, reproduced by permission of the National Library of Scotland

Of those which came within the area covered by the Cambridge office (where Robert Taylor was based), the two wards built at Ipswich had been demolished, although OS maps showed their distinctive outline (which was the same as the single pavilion built in 1914-15 as the Ipswich Smallpox Hospital). At Northampton there was a pair of pavilions with sanitary annexes with stalks at each end, and the readily identifiable double projections of single wards flanking the duty room. The potentially more interesting military blocks at Bedford, Biggleswade and Dunstable did not survive. The block at Biggleswade appears from maps to have been a plain rectangular structure without any projections for sanitary annexes or duty rooms. The most likely pavilion shown on maps of Biggleswade was another plain rectangular building, with a central rear sanitary annexe with narrow stalk. no building can be identified on maps of Bedford.

11 thoughts on “The Hospitals Investigator 9”