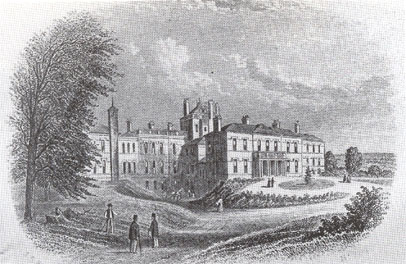 We visited the former Atkinson Morley Hospital in 1992 as part of the RCHME Hospitals Project. It was then still functioning as an acute hospital, specialising in brain surgery. The hospital closed in 2003 and remained empty and decaying for more than ten years. It is currently being converted into apartments by Berkeley Homes. It was designed as a convalescent home in conjunction with St George’s Hospital, Westminster, and was built in 1867 with generous funds left by Atkinson Morley, for the purpose of ‘receiving and maintaining and generally assisting the convalescent poor patients from St George’s Hospital’ in Westminster (Kelly, 1887). Atkinson Morley, the proprietor of the Burlington Hotel in Cork Street, Burlington Gardens, London, died in 1858 a wealthy man. He left a number of bequests to his relatives and friends and also for charitable purposes. These included the establishment of surgical scholarships at University College, a fund for the widows of tradesmen from St James’s parish in Westminster, and gifts of £1,000 each to Queen Charlotte’s Lying-in Hospital, the Lock Hospital, St Mary’s Hospital at Paddington, and the Royal Sea-Bathing Infirmary at Margate. In the terms of Morley’s will, the residue of his property was to be allowed to accumulate for five years before being applied to the building of the hospital. The foundation stone was laid on 25 July 1867, and the hospital was opened on July 14 1869, the anniversary of Morley’s death. There was not the usual elaborate ceremony on the occasion, as the governors of St George’s Hospital, who acted as the trustees of Morley’s bequest, felt that it would be inappropriate to spend any of the new hospital’s funds on such an event. It is unclear which architect should be credited with the design of the hospital. Edward and John Kelly seem to have been acting as architects to the hospital from 1866-7 and John Crawley took over in 1867-70. 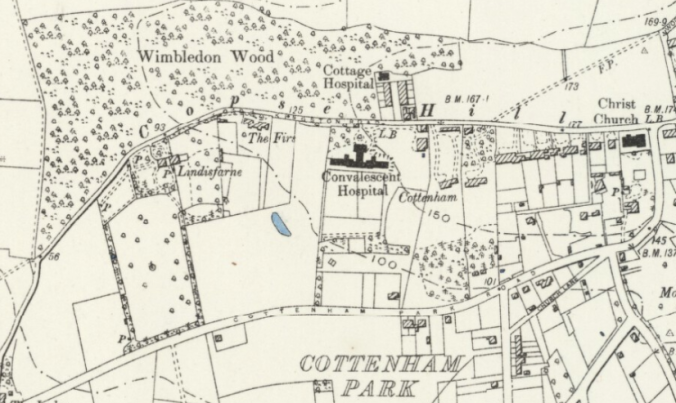 The hospital was built on Copse Hill, on a site which sloped gently to the south. Built of stock brick, with black and white brick string courses and white brick window heads, it was of two storeys and basement and was designed on a T-shaped plan.

Floor plan of Atkinson Morley Convalescent Home from H. C. Burdett’s Hospital and Asylums of the World, 1893. This shows the basement plan of the north block (at the bottom of the plan) which, because of the sloping site, was the ground floor of the main south block (at the top of the plan) 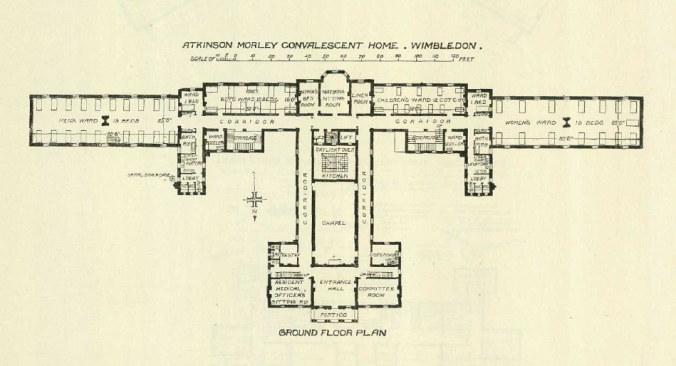 This shows the ground/first floor plan. The wards are of the Nightingale type, although later convalescent homes often departed from the pavilion plan for something more homely, as the patients were no longer ill, and many were ambulant, and so pleasant grounds were also an important feature. 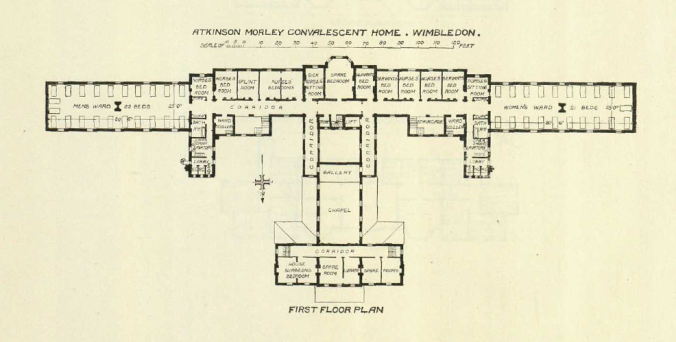 The main entrance and administration offices were on the north side, linked to the patients’ wing by the kitchens in the basement and the chapel above. The patients’ wing, which formed the cross-bar of the T, had a long south elevation. The basement here was in fact at ground level, due to the slope of the ground. 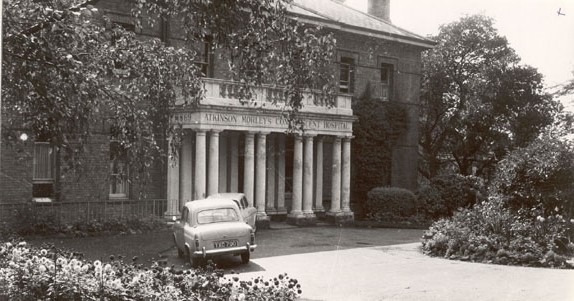 This photograph, and the engraved view at the top of this post, are taken from the Atkinson Morley Hospital Lung website

A portico, since removed, sheltered the main entrance which led into a square hall with the committee room on one side and a sitting-room for the resident medical officer on the other. Two corridors extended to the south, on either side of the chapel, which gave access to the patients’ wing, with the men’s accommodation on the east side and the women’s on the west. The chapel rose up through two storeys and was lit by arched windows with geometrically patterned glazing. There was a gallery at the south end, the altar being placed at the north end. The kitchen in the basement had nothing above it so that it could be provided with a large sky-light. Directly below the chapel were the stores, larders and scullery. 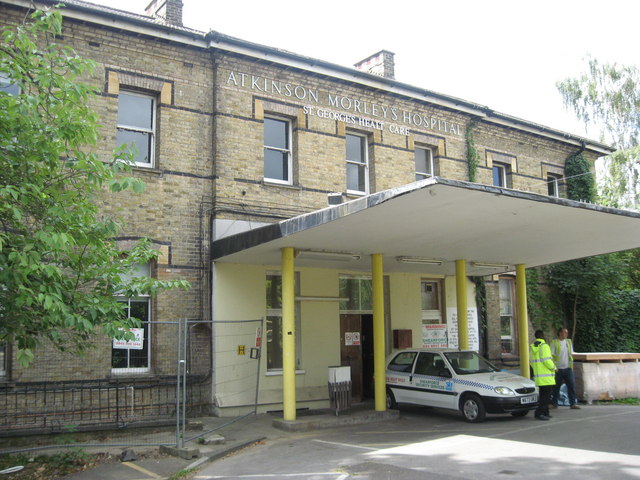 The central room on the south front, with a canted bay window, was Matron’s sitting room. To either side of this was a linen room and the Matron’s bedroom. On the exterior these central three bays were slightly advanced and rose up to an additional storey with a steep pitched roof ornamented by decorative iron brattishing. To either side of this central section were four bays standing slightly advanced from the outer wings. On the ground floor this area was occupied by children’s wards, and in the single bay between this and the outer ward wings, there was a small ward containing one bed. Below the children’s wards were dining-rooms for the patients, and in the centre a dining-room and day-room for the nurses. On the first floor there were staff bedrooms over the children’s wards and the bay-windowed room was a spare bedroom.

The outer wings, lit by five tall and narrow windows on each long side, contained wards on the ground and first floors and large day-rooms in the raised basement. The wards were furnished with between 15 and 22 beds and had a fireplace or stove in the centre. The sanitary towers were on the north side, as were the stairs.

The hospital was modernized, probably under the direction of Adams, Holden and Pearson, in 1931 (Allibone, F, Catalogue of Adams, Holden and Pearson drawings, RIBA). In the early 1940s the hospital began to take head injury cases to relieve the accommodation at St George’s. After its transfer to the NHS in 1948 it developed further as an acute hospital. The buildings suffered from the usual rag bag of additions, largely obscuring the original south elevation.

Architects John Thompson & Partners (JTP) were appointed by Berkeley Homes (Urban Renaissance) to work on the redevelopment of the Atkinson Morley Hospital in Wimbledon, London.  Part of the site is designated Metropolitan Open Land.  The site was previously owned by Laguna Quays until April 2010 when it was purchased by Berkeley Homes.