The present Royal Infirmary of Edinburgh was built in 1996-2002 as a PFI project, to designs by Keppie Design of Glasgow on a large green-field site south-east of the city, close to the A7 at Little France, by Craigmillar Castle, in a large area of open countryside. If you follow the A7 northwards, and cross over the A701, you reach its predecessor on the north side of the Meadows, fronting Lauriston Place. 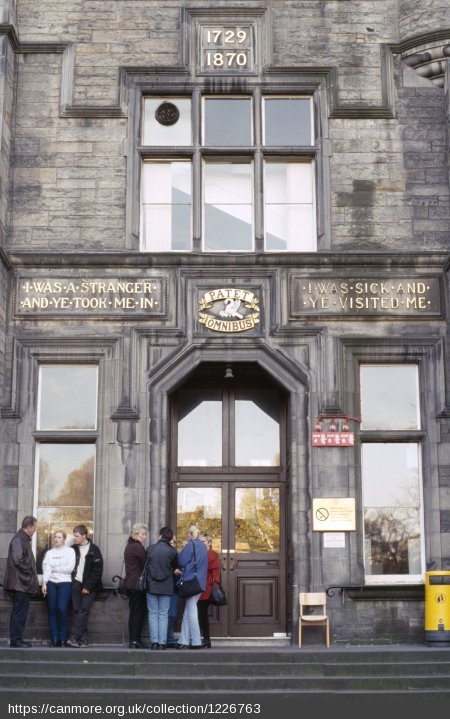 At the end of May 2004 The Scotsman reported that demolition work had begun on the old Edinburgh Royal Infirmary complex in Lauriston Place to make way for the £400m development. Contractors moved on to the site earlier that week to begin knocking down the Florence Nightingale nurse home, the boiler house and the dermatology ward (known as The Skins). The original developer was Southside Capital, which bought the site from Lothian University Hospitals Trust in 2001, and comprised a consortium with the Bank of Scotland, Taylor Woodrow and the Kilmartin Property Group. Planning permission was granted in December 2003, ‘after a battle with heritage watchdogs’, which included formal objections by Historic Scotland.  By 2009 the development was being undertaken by a joint venture of Gladedale Capital and the Bank of Scotland.

This aerial photograph was taken in 2007 and shows the empty space where the Simpson Memorial Maternity pavilion and the nurses home formerly stood on the right, from RCAHMS

Quartermile is a mixed development, combining residential and commercial premises over the 19-acre site. The design team was headed by Foster + Partners as the masterplanners and Architects working with Richard Murphy Architects; Hurd Rolland Architects; CDA – Architects and EDAW – Landscape Architects.

Edinburgh Royal Infirmary in the snow, from the Meadows in the late 1980s. (photograph (c) Harriet Richardson)

After years of adapting itself to the needs of modern medicine, and having enjoyed decades of Crown immunity which enabled additions to be made to the buildings without deference to the usual planning procedures, the Infirmary was a bit of a mess. All these accretions have been cleared away and the ranks of ward pavilions are as imposing and uncluttered as the day they were first completed. But much more than just the clutter of late twentieth century lift towers and sundry infill buildings have been removed, other casualties include the listed Simpson’s Memorial Maternity Pavilion, the Queen Mary Nursing Home and the George Watson’s wing of the Surgical Hospital. 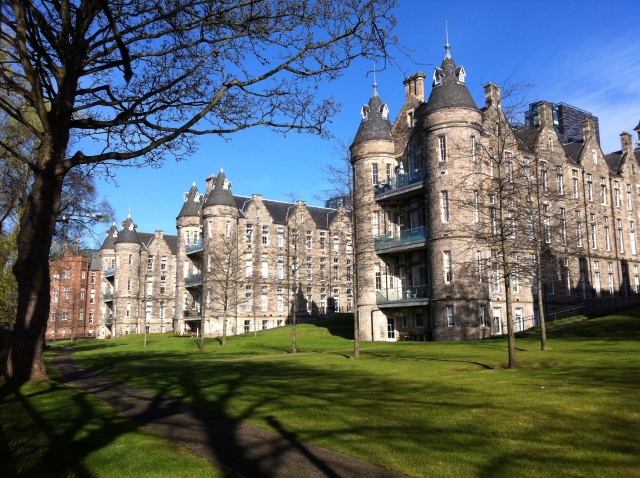 Walking round the site in April this year (2015), there are positive aspects to the works that have been done. Clearing away the accretions around the ward pavilions allows them to be appreciated, with open balconies once more, where residents can sit out and take the air, and communal gardens laid out between the pavilions. The unity of style of the new glass curtain-walled buildings acts as a foil or counter-balance to the stone-built Victorian hospital blocks, retaining the Simpson Pavilion might have interrupted Foster’s flow, but as it was on the edge of the site it could have provided an impressive termination, and provided a gentler transition between the new development and the tenements beyond.

Perhaps the most surprising loss is the eighteenth-century William Adam school building, George Watson’s Hospital, that had been retained by Bryce and about which he had designed his large infirmary complex.

It was not demolished without comment or protest. Even after the protests had failed to keep the building on the site, James Simpson made a plea for the building to be taken down stone by stone so that it might be rebuilt at some distant time.

The heart of the site today, a cavernous view between grey-glass curtain walls to the back end of the old infirmary admin block, with the clock tower rising beyond. (photograph (c) Harriet Richardson)

The OS map of 1882 shows what was then the recently completed Royal Infirmary on that site designed by David Bryce and built between 1870 and 1879.

It was one of the first in Scotland to adopt the pavilion plan, widely adopted for new hospital buildings from the 1860s. Though it was pipped to the post by the Western Infirmary in Glasgow by John Burnet senior, designed in 1867 and built in 1871-4, Edinburgh’s infirmary was far bigger. The Western Infirmary in Glasgow was hampered by a lack of funds, which both delayed building work and reduced the scale of the project, so that it could only provide 150 beds at first. The new Royal Infirmary in Edinburgh had 600 beds, placed in eight 3-storey ward pavilions, with one large ward per floor.

This aerial perspective of the infirmary, from RCAHMS,  makes an interesting comparison with the map of 1882 as it makes the hospital look as if it is almost in the middle of the countryside. It is apparently surrounded on all sides by green space, which of course was not actually the case.

This early photograph from across the Meadows, with its artfully posed sheep, similarly evokes the image of the hospital set in a rural idyl, from RCAHMS

At the heart of the new hospital, Bryce incorporated a part of William Adam’s school building, George Watson’s Hospital, built in 1738 the same year that the previous royal infirmary building was begun to Adam’s designs. It is easily identified on the ground plan below at the centre, being the range that is slightly askew in relation to the alignment of the rest of the buildings. It was adapted to house some of the administrative offices and the hospital chapel. To its north and south the ward pavilions were disported, linked by single-storey corridors, with surgical wards to the north facing Lauriston Place, and the medical section on the south side. What the pavilion plan enabled were the primary requirements of separation and classification. Each ward was a self-contained unit, its occupants having no connection with any other ward, and thus hopefully preventing the spread of infection.

The ward itself featured windows placed opposite each other to promote the all important cross-ventilation, there were single rooms at the corridor end, which could be fitted up for a patient, the supervising nurse, a ward kitchen and sluice room.

This photograph shows the interior of one of the top-floor wards, taken during the First World War, c.1917, from RCAHMS

The turrets at the opposite end were to contain water-closets and a bath. These sanitary towers evolved over the second half of the nineteenth century to become ever more separate from the ward itself, with the introduction of a small lobby, again, cross-ventilated, between ward and water-closet. Often a balcony was strung between the towers, offering a small space to sit out for ambulant patients.

One of the southern, medical ward pavilions photographed in 2015 after conversion to private flats. (photograph (c) Harriet Richardson)

Each pavilion could serve a different classification of patient. As mentioned, here Bryce located the surgical cases to the northern pavilions and the medical cases to the south, further classification allowed men and women to be separated, but the possibilities were endless. It was this adaptability of the plan which made it ubiquitous for almost all types of hospital for decades: in hospitals for infectious diseases the separation was made more complete between the pavilions by omitting the connecting corridors.

Despite the apparent vastness of the new Infirmary it was not long before additions and alterations were necessary. Sydney Mitchell & Wilson added a nurses’ home in 1890, the laundry in 1896, and the Diamond Jubilee Pavilion in 1897. In 1900 they designed two new pavilions for ear, nose and throat and ophthalmic patients. 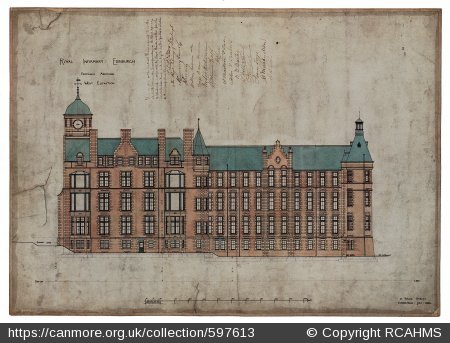 Drawing of 1896 for additions to the infirmary, this was the Jubilee pavilion and has been retained. It sits alongside the southern ward pavilions on the west side, from RCAHMS 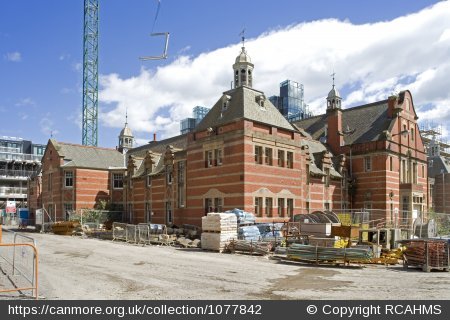 Photograph from RCAHMS. This was Sydney Mitchell’s Nurses Home of 1890, fondly known as the Red Home. A courtyard plan, offered an internal garden where the nursing staff could escape for some peace and quiet. It was originally intended to retain this handsome building, but the developers were given permission to demolish. It was argued that the building did not make a positive contribution to the local townscape, as its design, scale and form were out of keeping with neighbouring buildings, including the retained listed buildings. It was also considered to be ‘not a particularly good example of a building by Sydney Mitchell’, the neighbouring Ear, Nose and Throat pavilion being thought ‘a much better example’. More credibly it was claimed that it was not commercially viable to convert it. Demolition was permitted on the grounds that what would replace it would be of high quality and create a local public space at the heart of the site. 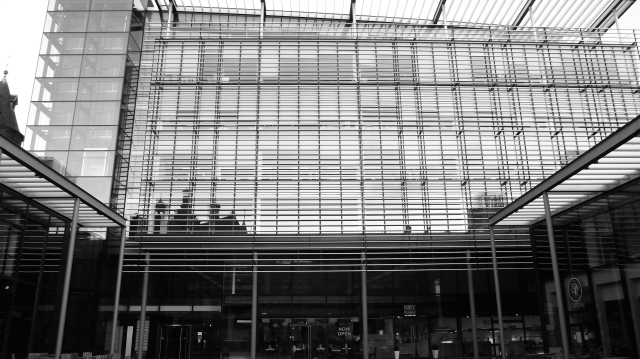 This is what replaced the Red Home, photographed in February 2015. ( ‘Lines’ by Byronv2 is licensed under CC-BY-NC 2.0)

The major addition of the twentieth century was the Simpson Memorial Maternity Pavilion constructed in 1935 to designs by Thomas W. Turnbull, with James Miller acting as consultant. An imposing steel framed building faced with concrete, as was the Florence Nightingale Nurses’ Home which was built at the same time. The Pavilion was officially opened on 1 March 1939.

The Simpson Memorial Maternity pavilion, photographed around 1940, viewed from the Meadows. Classically elegant, and a sad loss, from RCAHMS

The monumental nurses’ home built to the rear of the maternity wing, photographed around the time that building work was completed in 1939, from RCAHMS

The Simpson Memorial had its origins in the Edinburgh Lying‑in Hospital which opened in Park Place in November 1793. This was financed by Professor Hamilton and then by his son, James, until his death in 1839. It moved in 1843 and occupied five further sites before becoming the Edinburgh Royal Maternity and Simpson Memorial Hospital, in commemoration of the achievements in obstetrics of Sir James Young Simpson who died in 1870. The resultant building, designed by D. Macgibbon & T. Ross, opened in May 1879 and later became the School of Radiology, at No.79 Lauriston Place. The first ante‑natal clinic in Britain was opened there in 1915 as a result of the work of James Haig Ferguson. After the First World War buildings in Lauriston Park and Graham Street were acquired to try to combat overcrowding but this was not satisfactorily overcome until the new Pavilion was provided in the 1930s.

I am an architectural historian, currently a PhD student at the University of Edinburgh, researching post-war hospital buildings in Scotland. From 1991 to 2018 I worked on the Survey of London. During the late 1980s and early 1990s I worked on surveys of hospital architecture in Scotland and England.
View all posts by Harriet Richardson →
This entry was posted in Scottish Hospitals and tagged architecture, Edinburgh, Edinburgh Royal Infirmary, heritage, history, hospital, Lauriston Place, medical history, re-use. Bookmark the permalink.